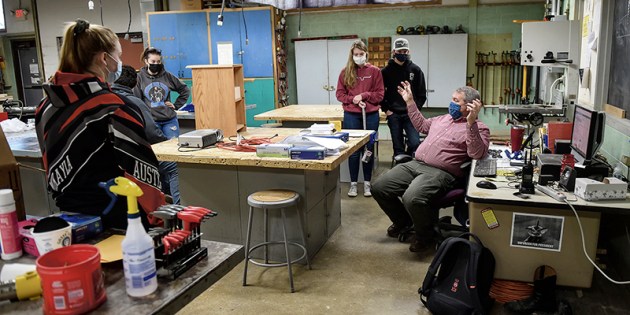 Lyle seniors come together with Jim Hansen to get to work on “The Polar Express.” With distance learning getting in the way, the class was forced to be inventive when it came to this year’s experience. Eric Johnson/photodesk@austindailyherald.com 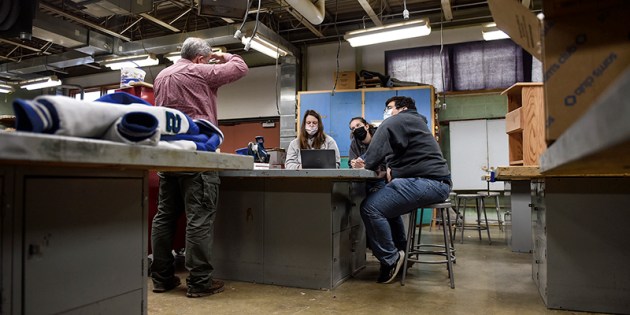 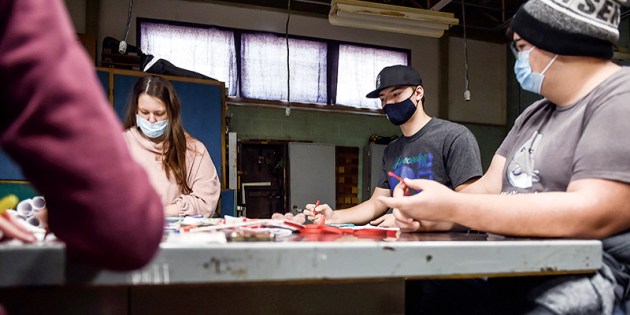 Lyle seniors start their work for Santa and filling out letters to students. Eric Johnson/photodesk@austindailyherald.com 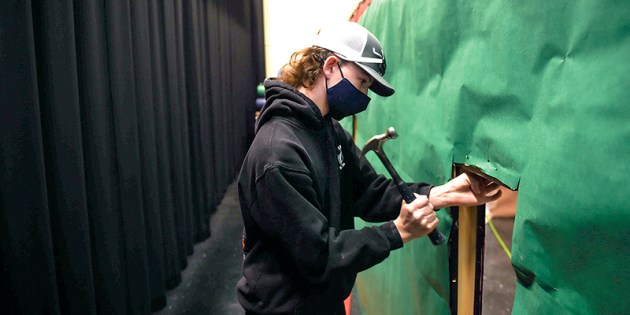 Mitchell Van Hooser works on the window frames of The Polar Express as seniors work on gettting even ready to go virtual this year. Eric Johnson/photodesk@austindailyherald.com 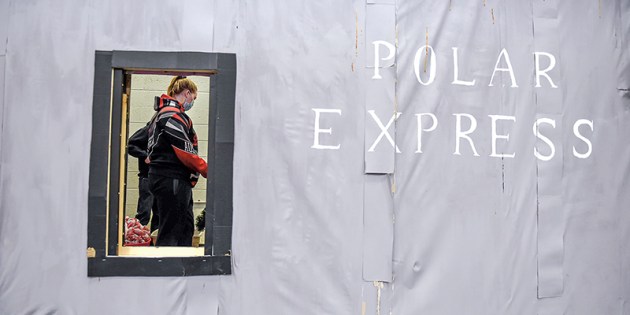 Mikayla Ingersoll works through the elements to be incorporated into this year’s Polar Express. Photos by Eric Johnson/photodesk@austindailyherald.com 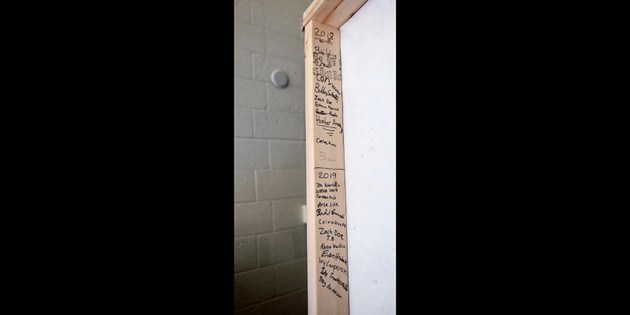 On the inside of the frame, Lyle students who have worked on past performances of The Polar Express have signed their names, lending another element to the memories. Eric Johnson/photodesk@austindailyherald.com 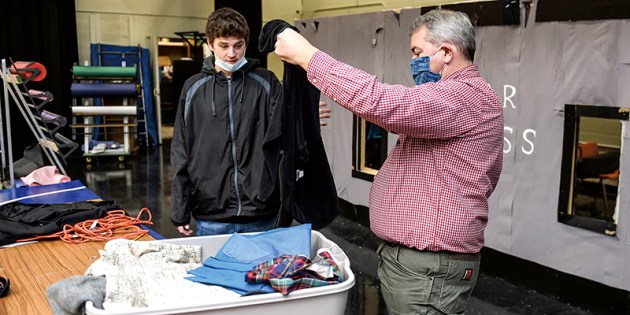 Lyle Senior Isaiah Clennon and James Hansen go through outfits as they figure out how to dress Clennon as the conductor from The Polar Express. Eric Johnson/photodesk@austindailyherald.com 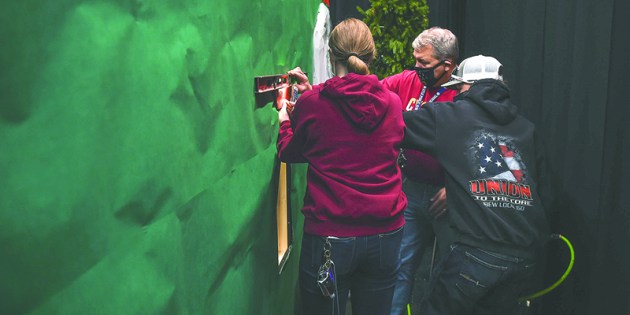 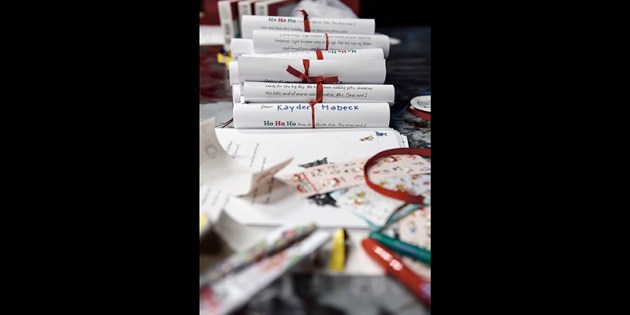 Santa’s letters to students are stacked and ready to send. Eric Johnson/photodesk@austindailyherald.com

Long standing traditions are those events we all look forward to. They are established in deed as well as memory.

In Lyle, students, faculty and administration have established one such tradition. While younger than maybe most traditions, the telling of “The Polar Express” has been a holiday event worth looking forward to.

However, COVID-19 was the Grinch to the school’s Christmas. It threatened an anticipated event, but what became a testament to accomplishment, seniors at the school, along with industrial tech teacher James Hansen, were determined to keep “The Polar Express” on track.

“We knew that Christmas wasn’t going to be the same,” Hansen said from the shop within the school.

On this particular Thursday afternoon, Hansen was waiting for the seniors to show up and pick up work on a project that had before been carried out at the school.

Slowly the students began trickling in and started talking about the work that lay ahead of them – work that would transform the usual telling of the popular Christmas story into something unique and very different.

Lyle Superintendent Jamie Goebel brought the idea to the school from a previous school when he took the position in Lyle. Hansen, in turn, took the idea and involved the senior class starting in 2018.

The story went as such: Each year, a senior transforms into the conductor of “The Polar Express,” then marches down to the elementary, ducking their head into the classroom and asking the students, “Are you coming?”

With the younger students in tow, the conductor leads them to the gym, where on the stage is a replica of a train car complete with chairs. The event is complete with all sorts of elements that lend themselves to a proper telling of the story for the students, right down to the hot chocolate served during the ride.

Once the story is read, the students return to their classrooms, where they will find bells waiting for them on their desks.

“This is a Christmas tradition,” Hansen said. “They should be able to have all of that stuff in a normal situation.”

But this is far from a normal situation and as Christmas approached, the school and its teachers began seeing the reality of the numbers represented in the rising COVID-19 cases.

“We’re looking at the numbers,” Hansen said. “At the time, as a teacher, we couldn’t say we were going to do distance learning. We had to say, ‘In the event, we need to be prepared. We need plans A, B and C. If we go to complete distance learning, what can we do to make Christmas special for these kids.”

The seniors came together in their Success Teams and came up with several ideas to follow, but they became more than that. The plans came together as one — The Polar Express Experience. The individual plans were rolled into one that would let the students be part of the annual event  virtually.

But it was more than simply virtual. It was, after all, an experience.

Shot in first person, the students were part of the experience as they lived through the person role-playing The Polar Express passenger as if they were the one actually taking part.

“I wanted the kids to be happy and know that even though something comes in their way, something is going to happen to let them get to where they want to go,” said senior Mikayla Ingersoll. “To know that Santa’s not getting taken away from them. I hope it lifts them up knowing not everything is going to be bad.”

The experience, however, was more than “The Polar Express.” Students were able to take part in a virtual meeting of Santa. Care packages were sent home with goodies, games and, of course, hot chocolate.

Santa also wrote letters to the kids that were sent with the care packages and in turn the students could drop off their own letters at a box in front of the school.

While the experience was meaningful and important to carry on for the sake of the elementary kids, it was meaningful for the seniors as well. The students found a time to bond with their own classmates, even though distance learning was making it hard to come together.

“It’s been actually exciting because now we can’t do anything,” said senior Emma Wilde. “I’m happy we can do this for the kids, because they don’t have school anymore either.”

“I think it’s really good that we can do that and it says that our class cares about the younger grades and cares about our school,” Wilde added.

It hasn’t been without its challenges though. The very idea that the seniors found it hard to come together put a major kink into it.

But Hansen and the students found ways to work together while following all of the guidelines set during this pandemic.

“It says a lot about how we can adapt to it,” said senior Nicholas Arkelos. “How we can come up with the ideas for something when we’ve had to change it.”

Those involved in putting this together at the same time found that not only did they have a backing from the school, but a community that wanted to take part in the event; parents who were excited to be able to take part in this with their children.

“It’s as big a deal with the parents as it is with the kids,” he added.

The school has definitely noticed the work the senior class has taken on.

“To see the students, especially the seniors that have had so many things taken from them, to grasp on to this idea in a way to give back to our younger students … So incredibly proud of them,” Goebel said. “You can see the excitement. They very easily could have curled up, but they ran with it.”

Goebel also noted that there has been a rise in the Christmas spirit as a whole; the school has been taken away by the meaning of the holiday.

But while the students from kindergarten through sixth grade are allowed to take part in this special tradition in some fashion, the seniors are gaining something from this, including an appreciation for their own classmates.

“It makes me feel really good,” Ingersoll said. “I would love to see the kids faces and reactions. I’ll definitely be on the Zoom calls with Santa to see how the kids react. I want to see how happy they are and see their emotions with Santa.”

This class will be remembered for the work they did within a special circumstance. It’s hoped that they can appreciate the moment with their classmates and their friends.

“This is going to be something to lift their spirits,” Hansen said. “Whether they know it or not they’re going to need this too.”