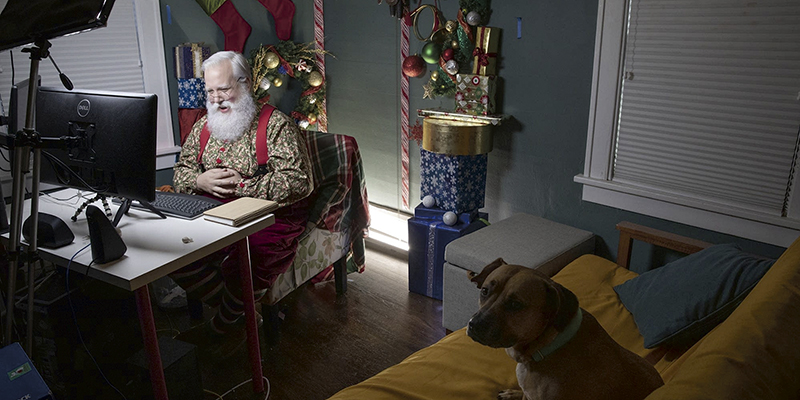 Brant Miller, also known as Santa Sam, visits with children virtually from his Minneapolis home Thursday as his dog, Cici, listens in. The Santa Experience at the Mall of America adapted from in-person meet-and-greets with Santa to virtual visits due to the pandemic. Christine T. Nguyen/MPR News

In years past, children eagerly waited in line for their chance to sit on Kriss Kringle’s lap and whisper their Christmas wish list into his ear. But this year, Santa’s lap is off limits.

With surging COVID-19 cases nationwide and restrictions in place throughout Minnesota to help curb the spread of the disease, Santa visits are the latest holiday tradition to be modified.

That has spurred creativity in Santa’s workshops. Santas conducting in-person visits are using some combination of masks, the outdoors, barriers and distance for safety. Others are doing virtual visits, where children chat with Santa online for prices typically ranging from $20 to $100, depending on the length and extras, such as whether customers want a recording. Some Santas are taking the season off.

But malls, which have struggled to attract shoppers for years, have been hesitant to cancel a holiday tradition that is one of their biggest ways to lure people during the all-important holiday shopping season.

More than 10 million U.S. households visited Santa in a mall or store last year, according to GlobalData Retail’s managing director Neil Saunders. Nearly 73 percent of them also spent money at nearby restaurants or stores, he says.

At Rosedale Center in Roseville, Minn., mall officials were preparing to introduce an augmented reality sleigh experience on Black Friday, a “100 percent touch-free experience where kids can stand in front of a screen and move their hands back and forth to ‘steer’ Santa’s sleigh,” according to a news release.

But that’s now on hold, due to Minnesota’s “dial-back” rules. Walz’s order restricts retail stores and malls from offering recreational or entertainment activities, including Santa meet-and-greets.

“This was totally unexpected,” Rosedale Center general manager Lisa Crain said in a statement. “We really felt this new touch-free experience could replace Santa and be the perfect solution during the pandemic.”

At the Mall of America in Bloomington, families can virtually visit the Candy Cane Institute — an interactive experience where families can help Santa’s elves discover what makes the holidays so special.

Initially, the mall planned to introduce the Candy Cane Institute as if the elves had set up their first field research office at the mall. Quickly, however, leadership had to pivot online.

“I think it’s of the utmost importance. It’s making sure we are still doing our part to share in that holiday magic in whatever way we can with families.” said Chris Grap, the Mall of America’s lead storyteller and experience designer.

The experience allows for individualized time with Santa’s elves, who have an array of activities planned, such as trying out the naughty or nice machine, breaking down and analyzing an ugly sweater, evaluating the optimal shape of a candy cane, and analyzing the best way to enjoy milk and cookies.

“It’s a choose-your-own-adventure, you’re the star of your own story. It’s like your own personal movie,” Grap said.

The eight-to-12-minute experience costs $20, plus tax, and ends with a visit to see the big guy himself. Tickets to the Candy Cane Institute are reservation-only.

One of the more traditional Santa meet-and-greets at the Mall of America, “The Santa Experience,” has also gone virtual this year. Guests will talk with Santa via Zoom, live from the North Pole. But, the transition didn’t come easily.

“I was concerned that children are already spending so much time on Zoom with school that coming to see Santa was just going to be another bummer,” said Brant Miller, aka Santa Sam, a fifth-year veteran of The Santa Experience.

While Miller said he misses kids running in the room to hug Santa, he’s having a lot of fun and thinks the kids are, too.

“Christmas is not going to look like Christmas this year, but just to give [kids] one normal thing like talking to Santa and laughing and being hopeful for some presents,” he said. “Everyone is on the nice list this year, no matter what.”

The Santa Experience has four different Santas available — but reservations are filling up quickly.

Five years on, signs that Paris climate accord is…