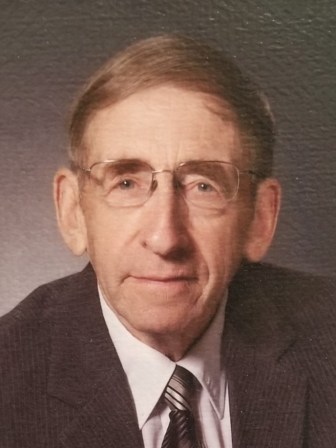 Clarence was born on November 4, 1930 in McIntire, IA to Edward and Olivia (Mullenbach) Merten. He couldn’t wait to jump the border and emigrate to Minnesota where he grew up on a dairy farm that valued hard work and family togetherness.

He married Catherine (Katie) Van Esch in 1956 and they raised two sons who survive him; Greg (Charlotte, NC) and Todd (Saint Augustine, FL). Sadly, he lost Katie in 1982 to multiple myeloma. He will be laid to rest next to her in Calvary Cemetery in Austin, MN.

Clarence was a plumber and worked proudly as the head of the gas meter department for the city of Austin, MN. He was popular among his co-workers and well known for his ability to fix anything from a lawn mower to a tractor. With his contagious sociability, he could make friends upon entering a room, as was attested by the nursing facility care givers who adored him.

Despite his proud Catholic faith and membership in the parish of St. Augustine in Austin, MN, we are having a private family memorial at this time. We thank you for your understanding in these trying times and ask you to keep his memory alive in your hearts as we lay him to rest.