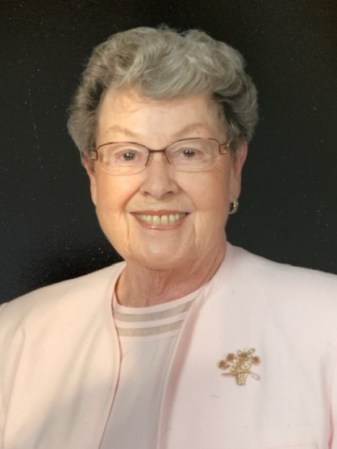 Catherine Louise Windschanz Buck, 90 of Fort Dodge died peacefully Christmas night at Friendship Haven. A celebration of life and burial of her ashes will be planned for next summer.

Cathy was born August 26, 1930 in Lorimor, Iowa. She was the seventh of nine children born to Elmer Ellsworth Kirkhart and Ina Pearl (Claytor) Kirkhart. She graduated from Lorimor High School in 1946 and moved soon after to Fort Dodge to live with her older married sister. She met Donald J. Windschanz and they were united in marriage in 1948 and moved to Sioux City while Don completed his degree in commercial business. They made their permanent home in Fort Dodge where Cathy briefly worked at The State Bank and Don joined his father in operating Windschanz Tax Service. They raised 4 lovely girls Marta, Kim, Lisa and Janet.

Cathy loved spending time tending vegetables and flowers in her garden, quilting, sewing, but by far her favorite activity was reading cookbooks and preparing new and delicious feasts. She always had some freshly baked bread, cookies or pie whenever her friends came over for coffee. Girl Scouts, Campfire girls, PEO, Trinity Regional volunteering, PTA, bridge clubs, Sunday school education and Methodist women’s circle were some of the community programs with which she had been active. She was a dedicated member of the First United Methodist Church of Fort Dodge.

After Don’s death in 1989, she married Leslie Buck of Austin, Minnesota. While an Austin resident, she was a member of the Westminster Presbyterian Church. Cathy was able to enjoy frequent visits from Les’s three daughters, Rhonda Rocap, Cindy Brienzo, Barbara Briggs and his 7 grandchildren. She developed many cherished friendships in the community, church and through her quilting. They resided in Austin for 25 years until she returned to Friendship Haven due to changes in her health.

She is well remembered by many for her bear hugs and laughter. Her daughters remember her love of coffee and warm phone conversations with her friends. Cathy was always the first to volunteer, whether it was to drive a friend to a cancer appointment, host foreign exchange students, foster parent or provide her delicious baked goods for a shut in or a church function. Her positive attitude and infectious laugh endured to the very end.

Cards may be sent to the family c/o Janet Moeller at 1252 North 23rd Street, Fort Dodge, Iowa 50501. In lieu of flowers, memorials received will be gifted to The First United Methodist Church of Fort Dodge.