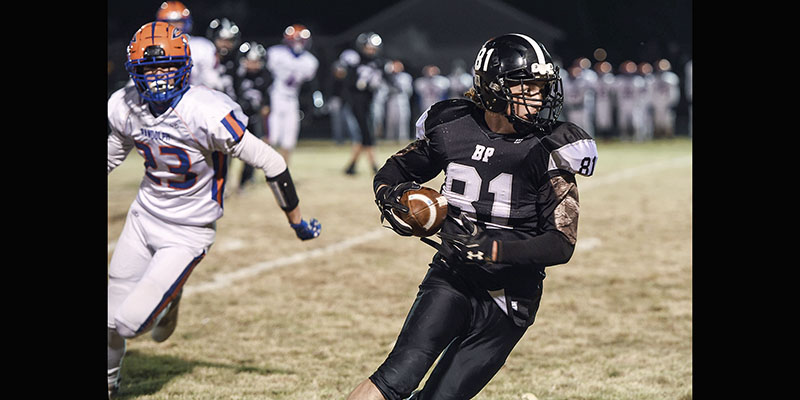 BLOOMING PRAIRIE — Mitchell Fiebiger had some big shoes to fill this fall and he certainly did his best.

The senior linebacker and wide receiver was a leader on both sides of the ball for the Awesome Blossoms and was recently honored for his achievement as he was named to the Minnesota Vikings All-State Team. Fiebiger was the lone Class A player on the team and received the award after BP grad and current Minnesota State football player Gabe Hagen earned the same honor last fall.

“It’s crazy to win this,” Fiebiger said. “We had Gabe win this last year and it’s crazy knowing that I get to do the same thing he did.”

BP head coach Chad Gimbel said he would love to have 11 kids like Fiebiger who he could put on the field.

“If you watch him play, you can see that he loves the game and he’s passionate,” Gimbel said. “He only knows one way to play and that’s full go. He’s 100 percent 100 percent of the time. He loves contact, he’s ferocious and he’s been a thumper for us for four years.”

Fibieger had 61 tackles, a sack and an interception and he also had 29 catches for 581 yards and nine TDs in just five games. BP has now won 18 straight games and three straight Section 1A titles. The Blossoms won their first ever Class A title last season, but this year, the team’s season ended after their Section 1A victory.

BP also underwent a two-week football quarantine due to a COVID-19 contact.

“We were living in the moment, that’s for sure. We played every game like it was our last and we had fun in every game. It’s hard to explain how you feel about a season like this,” said Fiebiger, who is a four-year starter. “I don’t think we had any closure at all. I definitely would’ve like to have had a real senior season, but that’s how it worked out.”

Fiebiger had plenty of football role models in BP. He had two older brothers who played in the state tournament for the Awesome Blossoms. He said that former Blossoms Max Romeo and Mitch Oswald were the most inspirational to his work ethic.

Fiebiger now has his sights set on playing college football and he’s started to garner some interest. He’d like to play offense and defense, but if he must choose one, he’ll line up on defense at the next level.

Gimbel knows that Fiebiger is capable of playing at the next level, he just hopes he gets the chance.

“Without a doubt, he can play at the next level,” Gimbel said. “This is a tough year for high school kids because colleges are able to keep their seniors, so they’re being awfully picky. I could see him playing Division II at least.”