With hunger on rise, Walz says food relief is ‘hand up’ not ‘handout’ 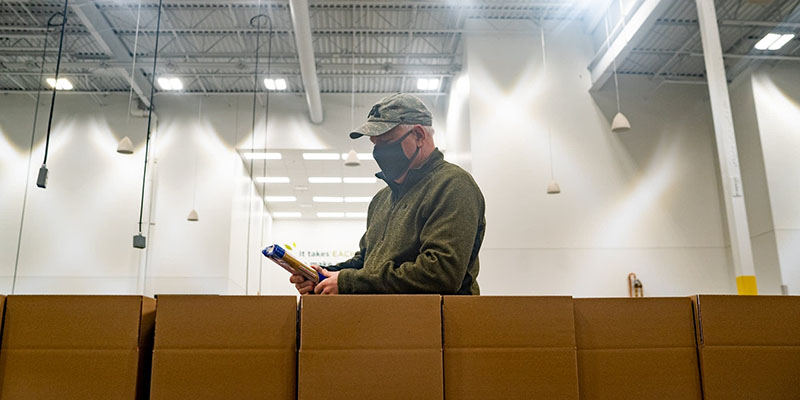 Gov. Tim Walz holds a package of spaghetti noodles before packing it into an emergency food box at Second Harvest Heartland in Brooklyn Park, Minn., on Wednesday.Evan Frost | MPR News

Gov. Tim Walz said Wednesday that he’s hoping to reach a deal for COVID-19 relief in the state by next week, including proposals for additional food assistance.

The food relief group Second Harvest Heartland estimates that 1 in 8 Minnesotans, including 20 percent of children, don’t know where their next meal is coming from.

Walz called on Minnesotans to refrain from gathering over the Thanksgiving holiday to prevent further spread of COVID-19. Minnesota has been seeing record numbers of positive cases and deaths in recent weeks.

Minnesotans should take a pause over the holiday and consider the health of their family and neighbors, the governor said.

“The sacrifices you’re making are making sure that those overwhelmed emergency rooms and those nurses and doctors are able to protect their family, able to keep working themselves,” Walz said.

Walz proposed a statewide COVID-19 relief package this week and said negotiations with the Legislature are progressing. Part of the proposed package would provide a bridge in funding for hunger relief programs in the state.

Walz says many Minnesotans are now struggling with food because of sacrifices they made to keep their neighbors safe. People shouldn’t be ashamed to access emergency food when they need it, he said

“Come and get this,” Walz said of emergency food aid. “This is not a handout, this is a hand up.”

Second Harvest Heartland CEO Allison O’Toole said it’s important to remove the stigma associated with getting help, especially when so many Americans are about to run out of unemployment benefits. She called on people to financially support food relief organizations, and for the federal government to pass another COVID-19 relief package and expand SNAP benefits.

“We can’t do it without you,” O’Toole said. “I have total faith that if we stick together we will get through this.”

Demand for delivered meals has increased drastically since the pandemic started, said Patrick Rowan, executive director of Metro Meals on Wheels. While federal stimulus money will help food relief groups provide services until the end of December, Rowan said it’s unclear if they’ll have to cut back if Congress doesn’t renew the funding.

“We’re really nervous about what happens in January,” Rowan said. “Without Congress passing another relief package, we’re going to be put in a really tight spot.”

State Department of Agriculture Commissioner Thom Peterson said farmers have played an important role in providing fresh food to food banks across the state, but that the pandemic has really brought home how important a strong statewide food system is.