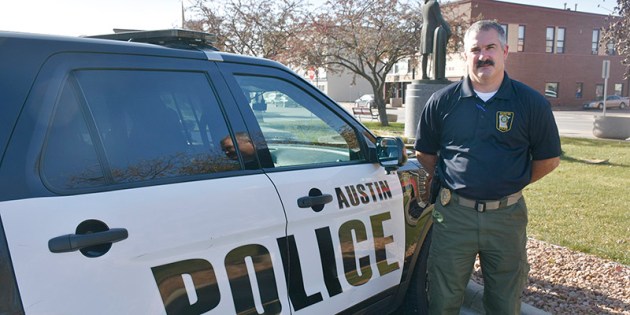 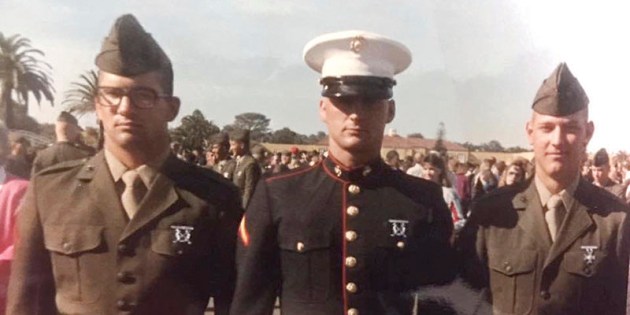 Clennon (left) during his graduation from basic training, December 1989 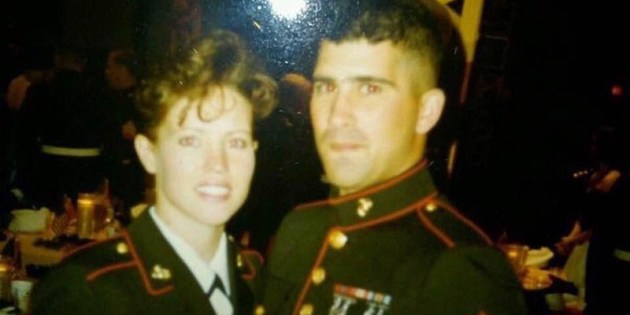 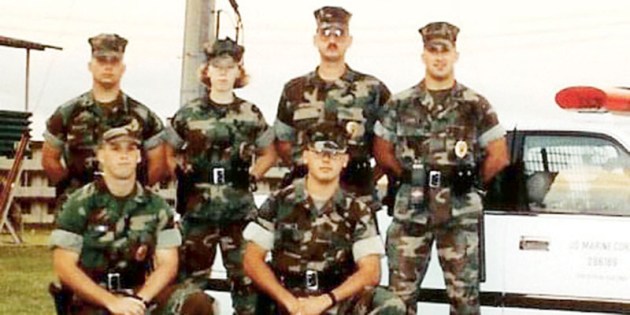 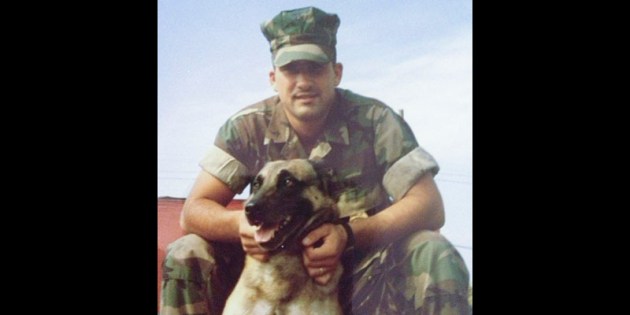 But before ever putting on a police uniform, Clennon wore the uniform of the United States Marine Corps.

Clennon first enlisted in 1988 as part of the delayed entry program while a student at Austin High School.

“At the time, the recruiting station was where Taco Johns is,” he said. “It was right next to the high school, so with any free time after school I could stop in. The recruiter was a really motivated guy. He was high energy and I liked that and it drew my attention.”

Clennon took his Armed Services Vocational Aptitude Battery test and went to the Military Entrance Processing Station in Minneapolis. When he enlisted, Clennon had a goal in mind for his time in the Marines.

“When I signed up, (the recruiter) said I could go into security forces,” he said. “I was determined to learn a skill or a trade that I could apply later in life and I was pretty adamant that I wouldn’t go in unless I could get an MP (military police) billet. I was ultimately able to get a billet under the 5800 field, which at the time I didn’t realize left me wide open to be a brig rat (jailer), a base MP, K9 or a field MP. I didn’t realize there were other branch-offs, but regardless, I signed up for the MP slot.”

“You follow yellow lines and yellow footprints and get yelled at a lot,” Clennon recalled.

“We were in Quonset huts out on the skirt of the main base,” he remembered. “There were early mornings, late nights and lots of running. But it was good.”

Clennon then attended the Military Police Academy at Lackland Air Force Base in Texas, where he said he ate the best food during his time in the service. Upon completion, he received orders to Kaneohe Bay, Hawaii, to be part of the Second Marine Expeditionary Brigade.

“Shortly after I got those orders, we were informed they were doing interviews for canine handler positions,” he said. “I interviewed for the canine handler position, got selected and my orders to Hawaii were cancelled. I began canine training at Lackland Air Force Base, which was pretty in-depth training. They have hundreds of dogs there for that purpose. I went through the basic obedience and patrol dog handler’s course. I also went through the narcotics and explosives dog handler course and then stuck around training explosive dogs to get shipped over to the Iraq/Kuwait area.”

After being stationed at Lackland for almost a year, Clennon received orders to Iwakuni, Japan.

“That week that I arrived there was when the (Persian) Gulf War started,” he recalled. “The base was on high alert and we had mirrors checking under cars at the gates. They didn’t have much for dogs there and for the majority of my time there, I did not have a dog. I was a base MP and did a lot of flight line patrol of the jets and different aircraft that were on the base. I did a lot of guard duty at gate shacks and things of that nature.”

While in Japan, Clennon spent a brief amount of time stationed at a small Japanese base in response to protests of Japanese minesweepers coming back from the Persian Gulf.

It was also in Japan that Clennon witnessed the fury of a typhoon.

“That was my one and only experience with that and that was enough,” he said with a laugh.

“I absolutely enjoyed it,” he said. “I met my wife (De Anna), who was an MP with the Provost Marshal’s office at Parris Island. I worked with primarily two dogs. One of them was Duke, a Belgian Malinois and fantastic dog. He was a narcotics and patrol dog and he and I frequently would get called out to search for recruits. Parris Island is a recruit depot and we’d do searches for wayward recruits and we had really good luck. We would usually find them somewhere out in the sticks on the base and bring them back. We did a lot of searches in the barracks, mainly for demonstration purposes. I also handled a Belgian Shepherd and he was an explosives dog. He and I would get called out from time to time if there was a threat on the base, but I never had any actual finds with him.”

“I enjoyed my time at Parris Island, and the reason that I did was because I was not a recruit,” he continued. “I was promoted to Corporal by then and De Anna and I had gotten married and we lived off base in Port Royal. It was pretty good duty.”

After four years in the Marine Corps, Cpl. Clennon decided it was time to move on.

“Military life was not what I had in my mind as a career,” he said. “When it was time for me to exit, I did so with butterflies in my stomach because I was getting let go without a job on the other side. That’s kind of a scary thought. We ended up leaving Parris Island in August of 1993. Once I got out and found my footing, I didn’t look back.”

Upon leaving the Marine Corps, the Clennons came to Austin. At the time, De Anna was pregnant with their oldest, Marie. Clennon, who remained in the Inactive Ready Reserve for about eight years, took a job at Riverside Arena before attending North Dakota State University in Fargo, where he eventually took a job with the Cass County Sheriff’s Department. He also worked in law enforcement in Kansas City before taking a position with the Austin Police Department.

“Going back to the beginning, when I was adamant about getting some skills and education that would be applicable down the road, it was kind of a natural transition to go into law enforcement because that’s what I was familiar with,” he said.

Clennon said he has no regrets about joining the Marine Corps.

“It seems as I get older, the memories become more fond,” he said. “With social media, my wife and I have reconnected with a lot of friends and people that we knew from those days. We went to the Marine Corps Ball last year in Las Vegas with a group of those people and it was a blast to see them again. We were hoping to go this year, but of course it didn’t come to fruition. Maybe next year it’ll be something we look forward to doing as long as we can because it’s just fun to reconnect and get back into that military environment in a social manner and for a short period of time.”