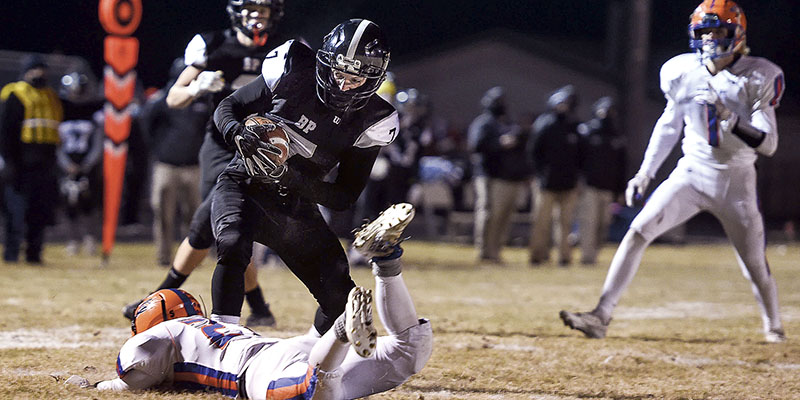 Blooming Prairie’s Bradley Simon turns after a catch before running in for a touchdown against Randolph in the Section 1A title game Friday night in Blooming Prairie. Eric Johnson/photodesk@austindailyherald.com

It was a strange ending to the season for a pair of area powerhouses this past Friday night.

BP took care of business as it blasted Randolph 49-6. The Awesome Blossoms, who won their first state title in program history in 2019, are left wondering what could have been if the COVID-19 virus hadn’t put a lingering damper on the world of prep sports last spring.

BP, which has gone 30-1 overall in the last three seasons, will return junior quarterback Drew Kittleson next season and it is quite likely the Awesome Blossoms will be back in contention for another Section 1A title if the 2021 season has any sense of normalcy to it.

The Superlarks’ story went a little bit different as they were given a week to prepare for their biggest game of the season without half of their usual lineup. GM was forced to rely on many of its JV players as nine of its upper classmen had to sit out the game due to COVID-19 contact tracing.

The Burros looked like they were going to literally run away with the game early on as they smashed their way to an overpowering physical drive to begin the game. But GM’s youngsters showed a lot of fight and although they eventually lost 16-12 — due to two-point conversions — those players picked up an experience that will motivate them next season and beyond.

The Superlarks will certainly have to do some reloading next season, but hopes will still be high for a team that has gone 23-6 and earned one state berth in the last three years.

While it is frustrating to see teams play a season without a state champion, you can’t say any of the games this fall were meaningless. I saw and heard plenty of smiles, screams and tears from players and coaches alike throughout the pandemic-shortened season. Maybe those seven weeks of competition were just enough to get those kids through the next wave of COVID-19, which has already put a halt to winter sports.