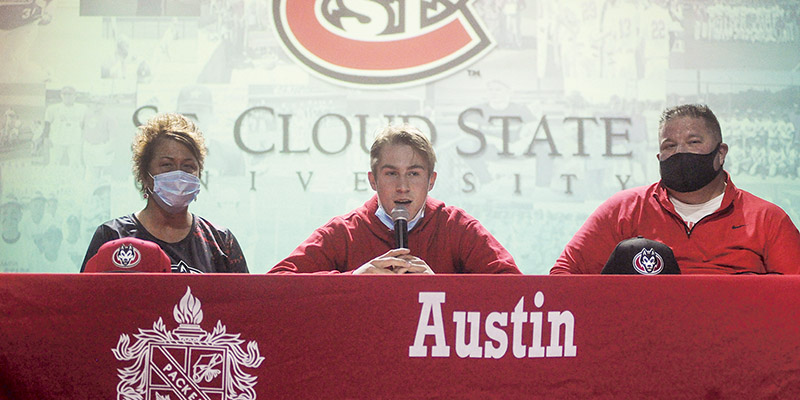 Teyghan Hovland, center, speaks before signing with St. Cloud State while being flanked by his parents Sharon and Jeff Hovland in Cornerstone Church Monday. Rocky Hulne/sports@austindailyherald.com

Hovland made his commitment to the Huskies this past summer, but he now has his future on the baseball diamond cemented. 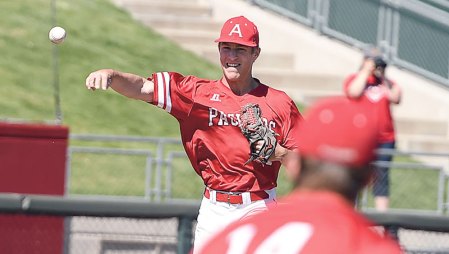 Austin pitcher Teyghan Hovland throws to first on a pick-off attempt in the state tournament in 2019. Eric Johnson/photodesk@austindailyherald.com

“Growing up as a little kid, everyone always told me I was going to make it big,” Hovland said. “Now I’m going to Saint Cloud and I’m thankful for everyone who supported me along the way.”

Hovland drew a good crowd that ranged from his grandparents, a former teacher and a pair of his coaches. He was glad to share his celebration with those who have been there for him.

“It’s definitely another weight off my shoulder and to have all of these people here means a lot,” Hovland said. “There are a lot of people I grew up with and a lot of people that impacted me greatly here.”

Teyghan’s father Jeff gave credit to all of his former coaches and recognized how much work his son put in with various club baseball organizations throughout the state.

Hovland is currently the quarterback of the Austin football team and also plays basketball for the Packers.

Although he missed out on his junior season with the Packers due to the COVID-19 pandemic, Hovland had a huge year in 2019, pitching the Packers to an upset win over Hill Murray in the opening round of the Minnesota Class AAA State Tournament. He hit .350 that year with one homer, three triples, five doubles and 20 RBIs. As a pitcher, Hovland maintained an ERA of 1.70, while striking out 46 and walking 14 hitters.

The Huskies finished 9-5 overall this past spring before the season was called off and they went 41-14 overall in 2019.