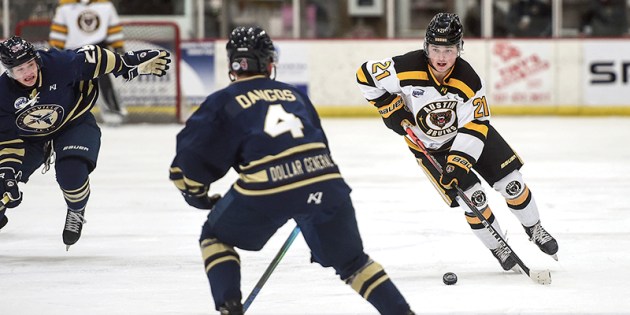 Austin’s Kyle Olesiuk brings the puck up ice in the second period against Janesville at Riverside Arena. Eric Johnson/photodesk@austindailyherald.com 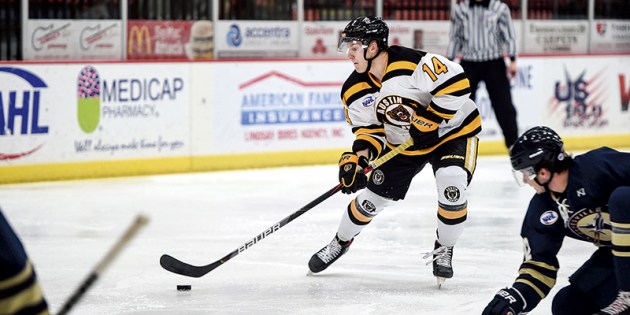 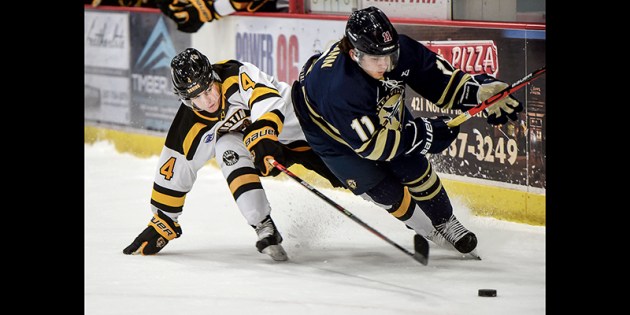 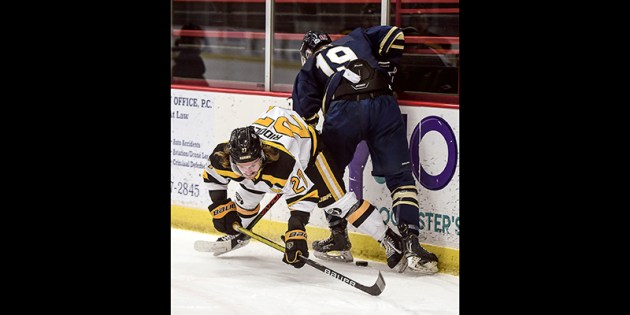 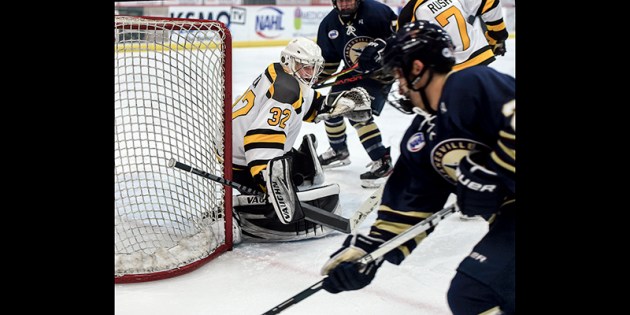 Austin’s Tyler Shea tracks the puck during the first period this past November. Herald file photo

The Austin Bruins welcomed back the NAHL season with a back-and-forth battle against the Janesville Jets that Austin won 4-3 in Riverside Arena Friday night.

Neither team led by more than a goal at any point and it wasn’t until Walter Zacher scored his second goal of the night on a quick strike from near the net that Austin could taste the victory. Zacher’s goal came from the corner on a pass from Alex Trombley with just a shade over three minutes left and it gave the Bruins a 4-3 lead.

Zacher moved to Austin two weeks ago after playing for Sherwood Park in the Alberta Junior Hockey League.

Zacher hasn’t had a lot of time to get used to his new teammates, but he’s already found his scoring touch.

“I’m just out here playing hockey and I was really excited to play with Trombley and (Carson) Riddle,” Zacher said. “They’ve helped me out a lot.”

Zacher, a native of Buffalo, New York, came to the Bruins when his family advisor Tim Madsen, who used to coach the Minnesota Wilderness, directed him to Austin head coach Steve Howard.

“The kid had two absolute snipes tonight,” Howard said of Zacher. “We got him from an old friend of mine. He told me he had this kid that shoots the puck and he’s going to be a game changer for us. We’re happy he called us and we’re happy to have Walt.”

The Jets (2-1 overall) pulled their goalie with just over a minute left, but Austin’s defense kept them from attempting a shot in that stretch.

After both teams were deadlocked at 2-2 for most of the second period, the Jets grabbed a 3-2 lead when Shane Ott scored on a rebound early in the third period. The Bruins bounced back and tied it up at 3-3 when Barrett Brooks found the net with 9:09 left in the third.

“Our guys are resilient. I like the fact that we didn’t quit,” Howard said.

Riddle is the most experienced Bruin on the roster and he had never had such a long hockey drought in his life.

“Eight months to wait for a game is a long time. It hasn’t been like that since I first started,” Riddle said. “To get back out here in front of some of our fans and play felt really really good. Preseason didn’t go how we wanted to, but the regular season is how men are made. We got the nerves out. Once the puck drops the nerves kind of go away and we go back to what we know.”

Austin tied up the game at 2-2 when Zacher converted a shot in transition off a pass from goalie Tyler Shea early in the second period.

Early on things took an immediate turn for the worse after Peter Jacobs scored on a slap shot to give the Bruins a 1-0 lead. Janesville’s Jaxon Ezman put in a shot on a power play and Alexander Lucken floated a puck through Shea’s five-hole immediately after the ensuing face-off.

“Tyler obviously wants that goal back. It just hit a rut in the ice and jumped over him,” Howard said. “I love the fact that that kid bounced back and stayed in it. I was a little worried when he came over the bench to get a drink of water, but he got right back in the game and made some big saves for us.”

Shea stopped 17 shots for the Bruins. 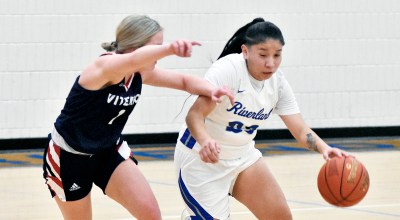