Bruins are ready to return to the ice 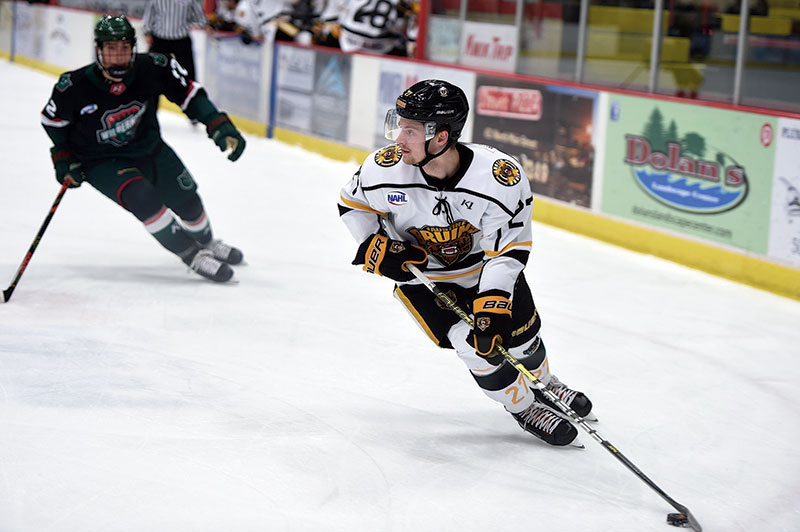 The Bruins Carson Riddles looks for an outlet during the first period against the MInnesota Wilderness last season. Herald file photo

It’s been nearly seven months since the Austin Bruins have taken the ice, but the team is ready to roar again as they finally open their season Friday night when they host the Janesville Jets at 7:05 p.m.

The much anticipated opener comes after the COVID-19 pandemic wiped out last season’s playoffs and caused a late start to this season.

Usually the Bruins begin playing in September, but they’ve had to be extremely patient this year.

“We’ve had a good week of practice, but I think the guys are tired of hitting each other,” Austin head coach Steve Howard said. “They’re excited to play against another team. It’s tough to practice without any games. We want to see where we’re at and I’m sure we’re all going to have a few cobwebs that we need to knock off, staff included. Janesville’s a good hockey team and they’ve got a lot of guys that go at the net hard. It’ll be a challenge for us.”

The Bruins finished last season with a record of 28-16-7 overall and they were on track to make the playoffs before the season was called off due to COVID-19. The team is bringing back some veteran leadership in forwards Connor Mylymok, Barrett Brooks and Carson Riddle.

“Connor Mylmok will be a huge asset for us this year. He’s taken a huge step since last year and we’re hoping to have him in the lineup Friday,” Howard said. “

We want to progressively get better and fix mistakes. We haven’t had any games to make those mistakes and correct them. Hopefully we come out and do well, but at the same time we have to take it one game at a time and get better.”

Austin is also looking to get a lift from its No. 1 draft pick Alex Trombley, who played for the USHSL’s Madison Capitols last season.

The Bruins were able to play seven preseason games, but they haven’t been in action against another team for a few weeks. Howard is hoping the roster can come together over the next few weeks of action.

“We have too many guys. Everybody has too many,” Howard said. “Deadlines are coming up and we’ll have to trim the roster down. It’ll be nice to get some games in before we have to do that.”

The Bruins are allowed to have no more than 250 fans in each of their games against Janesville this weekend, and the team has also had to make adjustments to the pandemic. Masks will be required for players and staff and players are being asked to stay distanced when friends and family visit.

While nothing is ideal, Howard just wants to get back to coaching and competing.

“We’ve got some new guys that can put the puck in the net,” he said. “Hopefully we can get a viewing of some of these guys to make some decisions.”