Born Jan. 4, 1923, in Corpus Christi, Texas, Warren Gamaliel Harding Crecy had a reputation as a polite, mild-mannered man. He enlisted in the Army on April 12, 1942, at Fort Sam Houston and went through basic training at Fort Knox, Kentucky. After basic training, Crecy was stationed in Camp Hood (later Fort Hood), Texas, and assigned to the segregated 761st Tank Battalion, the same unit as Hall of Fame baseball player Jackie Robinson.

Despite the obstacles faced by Black soldiers during World War II, Crecy proved to be an able soldier, training first on a M5 Stuart light tank and later on a M4 Sherman medium tank. 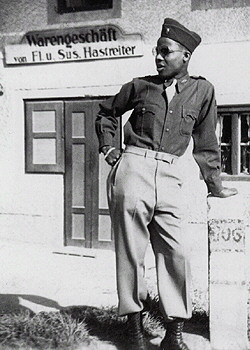 On Sept. 7, 1944, the 761st, known as the “Black Panthers,” arrived in Dorset, England, and landed in Normandy one month later. By this point, Crecy had risen to the rank of Sergeant and was commander of his tank crew.

Crecy first saw combat on Nov. 9, 1944, in the northern section of Morville-lès-Vic, France. In the face of tough enemy resistance, Crecy’s tank was disabled by a German anti-tank emplacement. Crecy exited the disabled tank, commandeered a jeep and fired the vehicle’s .30 caliber machine gun into the German position, killing most of the defenders and forcing the rest to flee. He and his crew then found a serviceable tank and continued to fight.

As the Americans continued to eliminate German resistance in Morville-lès-Vic, Crecy’s second tank got stuck in the mud near a pinned down American infantry unit. Despite the tank being under heavy German machine gun fire, Crecy mounted the tank’s .50 caliber machine gun and fired back, allowing the infantry unit a means of escape from the deadly enemy fire.

The mild-mannered Crecy developed a reputation as a fierce fighter, particularly after the death of his best friend, Horatio Scott. His ferocity earned him the nicknames “Iron Man” and “the Baddest Man in the 761st,” along with a battlefield commission to Second Lieutenant in May 1945. He was put up for a Medal of Honor for his actions on Nov. 9, 1944, but was awarded the Silver Star. In the 90s, a review of Crecy’s nomination determined his actions fell short of being upgraded to the Medal of Honor.

Crecy remained in the Army after the war and was stationed in Germany, where he served as a prison officer during the Nuremberg Trials. In 1950, he was stationed in Fort Benning, Georgia, as the commander of an all-white company. In 1952, 1st Lt. Crecy was deployed to the Korean Peninsula and once again entered combat. On Oct. 13, 1952, he was severely injured by an enemy mortar round. His debilitating injuries lasted the rest of his career; he was medically retired from the Army in 1965 with the rank of Major. Along with the Silver Star, he had also been awarded the Bronze Star and four Purple Hearts.

After leaving the Army, Crecy lived in San Francisco and was a frequent patient at the Letterman Army Hospital. Life was difficult for Crecy, but he spent his time trying to motivate the other wounded military personnel he met at the hospital. In 1976, Crecy got to see his son, Warren Harding Crecy Jr., graduate from the U.S. Military Academy in West Point, New York.

Crecy died on Oct. 26, 1976, in San Francisco. He is buried in Arlington National Cemetery.

Crecy Street at the Naval Air Station in Corpus Christi was named in his honor.

Vikings offense with O’Connell still a work in progress