Let’s get ahead of the moment, shall we.

This is authentic pumpkin pie and does not require a hurried and frantic run to the grocery store to hoard Festel filling, which apparently is by far the best and requires black market, underground trading if  you can’t get a limited run at the supermarket. 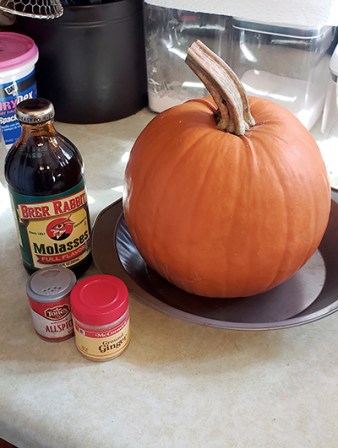 Somebody will have to explain this to me someday. Reader No. 47, I leave that up to you.

The YouTube site that hosted the video is Townsends, hosted by John Townsends, and largely it deals with everyday life in the 1700 and early 1800s. Lately the videos have been about everything colonial, from cooking, building a cabin and how to oil a canvas.

However, when I started watching the channel (because yes, I’m a history dork) it largely was cooking meals from known cooks of the time.

Though I have yet to make the recipe (but I could have by the time you read this), I already can tell that it will be time consuming.

First, I’m roasting a pumpkin for an hour or so, then I’m prepping for another 30 minutes and then baking said pies for another hour or so.

Am I the only one to be making pies from scratch, using a pumpkin rather than filling? Extremely doubtful. First of all, there are people that are far more talented in a kitchen than I am and probably come out of it 10 out of 10 times without missing parts of their finger.

Of course I speak from experience. What, are you new to this column?

So no, I’m not breaking any new ground insofar as cooking pumpkin pies from scratch are concerned.

What I do love is the idea of a direct connection to history. Not so much the recipe, though I am looking forward to it. The idea of a piece of pumpkin pie and homemade mead is rather enticing.

Rather, I love the idea of being connected to such a remote period of time. Not so remote as ancient Egypt, but pretty remote all the same.

I’ve always loved this period of history. From a very young age I was drawn to the events of Colonial America and in particular the American Revolution. It’s the ultimate underdog story where England was Miami and America was Boston College with Doug “George Washington” Flutie throwing American history’s greatest Hail Mary.

I expect bonus points for the football-American Revolution analogy. Only a skilled lingual ratscallion could do that.

I can’t rightly say why I have been drawn to this part of history nor why I’m looking forward to making pumpkin pie from the pumpkin on down.

So, in writing this, I’ve decided that this is Part 1 of a two-part column series titled, “The Epic of Pie.”

I’ll let you know if I come away with all of my fingers attached.