Teachers Together: Educators throughout APS honored as Teachers of the Year 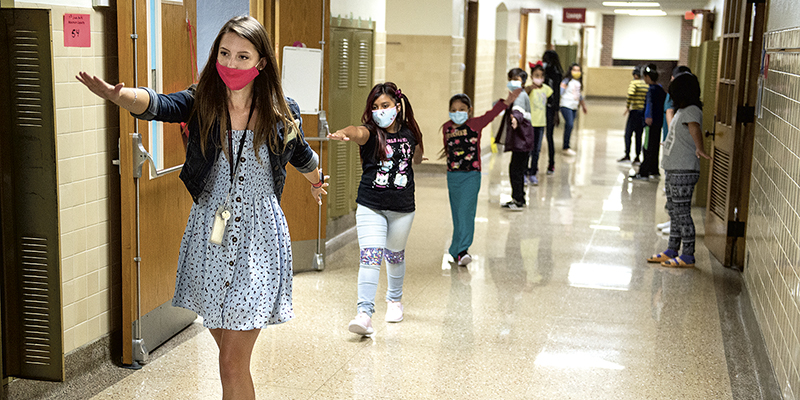 Sumner Elementary School teacher Jessica Dammen leads her students down the hallway while showing them how to keep proper social distancing on the first day back.Herald file photo

Every year at about this time, behavior coach for IJ Holton Intermediate School and Ellis Middle School Dave Brown is preparing to announce the Austin Public Schools Teacher of the Year.

It’s a process that begins in the spring and comes to a head during the first part of November when the teacher is announced.

However, as it has in so many areas, COVID-19 has interjected itself and caused an upheaval. But instead of still trying to go through and pick one teacher, the committee in charge of the choice have taken a team approach. 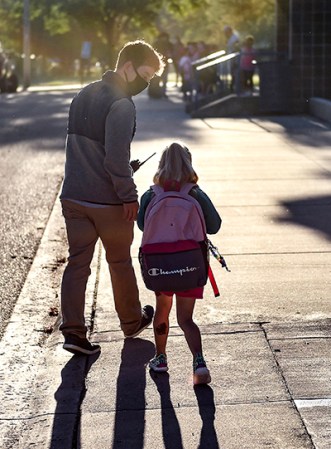 Southgate Elementary teacher Joe Kroc leads a student to the door she is supposed to go into during the first day of school in early September. Herald file photo

This year’s Teacher of the Year are all the teachers of the school district.

“I don’t know how we select one person that stood out, when every teacher has recreated the way they’ve taught in two days essentially.”

When the COVID-19 pandemic brought last year’s school year to a screeching halt, it forced educators throughout the United States to pivot on their heels in order to teach distance learning.

When it came to this year, teachers once again had to adapt to a hybrid or fully in-person format depending on whether or not they taught at the elementary, middle or high schools.

“Their forte is not online learning and online teaching. With the hybrid schooling and the 100 percent distance learners, it’s quite the adjustment,” he said.

Still, the teachers did it, and the decision was made to name all of them Teachers of the Year that much easier.

“There were a couple of options,” said Southgate Elementary teacher Traci Braaten and former Teacher of the Year winner. She is also on the committee that chooses each year’s winner. “Do we do things as normal where we kind of put it out as normal that it’s time to nominate or do we, because it was such an odd year, do we not do it.”

The road to this decision started early when the pandemic was setting down a foundation. The committee looked at examples from other places, but when the decision was finally made it was unanimous.

We all kind of decided on that as a whole,” Braaten said. “We didn’t want to cancel it for good because it really is an honor.”

In a normal year, the selection process begins toward the end of the spring semesters. Teachers are nominated and then Brown, who heads the selection committee made up of past winners, reaches out to ensure those nominated want to go through the process.

If so, then there is a process they go through including submitting an application. The winner will then take the next step in advancing to the state competition.

This idea, of choosing the teachers as whole isn’t exactly new. In considering the winner, the district itself puts its entire weight behind picking the teacher to give it more backing.

“Typically, the state opens it up to everybody,” Brown said. “What we do as a local association, puts our backing behind one person. We try to make it a big deal.”

And a big deal it is.

The teacher, who never knows the award is coming, is surprised either in their classroom or an all school assembly.

The celebration of teachers went beyond naming them Teachers of the Year. This summer, the staff had a back to school kickoff where a video was shown thanking them including Brown and district administrators.

Braaten sees that work every day, but at the end of each day she sees a very simple fact: They are back in school.

Coming from a different perspective, Brown also sees the amount of work teachers have put in, making the Teachers of the Year a worthwhile move.

“I am floored every single day,” Brown said. “I have the unique position to walk throughout the school and see how the teachers have come together. It’s not perfect, but it’s absolutely remarkable.”