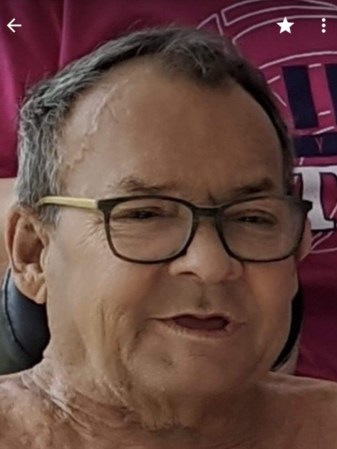 Steve was born March 28, 1961 in Waterloo, Iowa to Kenneth and Darla (Lerum) Hamilton. He grew up in Waterloo, Iowa and later moved in with his loving grandparents in Lyle, Minnesota. He graduated from Lyle and married his high school sweetheart, Carol Hanson. They had four children together, Natasha, Michaela, Hannah and Levi. Steve worked as an electrician in the union for over 20 years and retired in 2012 after he became disabled from final stage kidney failure and later spinal stenosis.

His pride and joy were his children and five grandchildren (soon to be six): Nadia, Zoey, Holden, Braxyn and Claire. Steve loved to deer hunt and fish at the pond his grandpa made and later built a house there. He spent many hours gardening and canning to provide for his family. He liked to reminisce about his glory days of boxing. He loved playing with the grandchildren and practiced everyday getting them to say “grandpa”.

Steve will be missed by his children; grandchildren; mother, Darla Ray of Waterloo, Iowa; five sisters and four brothers; many nieces, nephews, aunts, uncles and cousins.

Funeral services will be held at 4:00 pm on Thursday, October 8th at Faith Lutheran Church in London with the Reverend Kent Otterman officiating. Visitation will be at the church one hour prior to the service.