Packers snap their losing skid with victory over Raiders

Austin’s Claire Raymond watches her shot against Northfield in Art Hass Stadium Tuesday. The shot went through for a goal and the Packers beat the Raiders 3-1. Rocky Hulne/sports@austindailyherald.com

It didn’t take long for the Packer girls soccer team to snap out of their scoring slump as they found some early offense in a 3-1 win over Northfield to close out the regular season in Art Hass Stadium Tuesday.

Austin senior Eliana Bentley broke loose for a runaway goal in the sixth minute of the game to put Austin up 1-0 as she kick-started a Packer offense that had produced just two total goals during its eight-game losing streak.

“I think we all came into this game thinking Northfield is number one and that they’re really good. We just didn’t let it get to us and we just played how we can play,” Bentley said. “It was probably the last time us seniors ever play on this field and it felt really good to win it. It was a little emotional, but we stayed focused.” 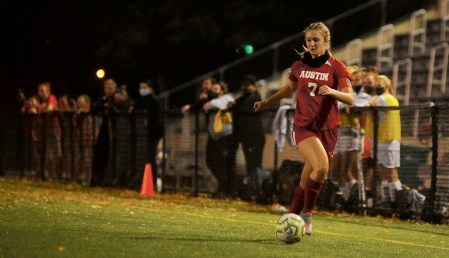 Northfield (5-3-3 overall, 5-3-3 Big Nine) was hit with a red card a few minutes after Bentley’s goal and that left them a player short for the rest of the night. The Packers (2-8 overall, 2-8 Big Nine) took advantage as Claire Raymond punched one home to make it 2-0.

Austin stayed aggressive well after it took the 2-0 lead and it added an insurance goal when Hope Dudycha drilled a shot in the second half.

“It boils down to girls believing in themselves. The skills and the mindset are there and they just have to have that belief,” Austin head coach Jake Levisen said. “I think you saw that tonight. No matter how far ahead we are, we always have more to give.”

Austin sophomore Mya Walters stopped the first 13 shots she saw in net, but her shutout bid was broken when the Raiders scored a late goal with 32 seconds left. Walters has grown to be more aggressive in her first year as a varsity keeper for the Packers.

“I’ve learned a lot this year and I’ve definitely gotten more confident at coming out of the net and attacking the ball,” Walter said. 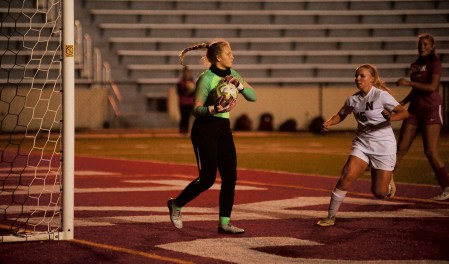 Although it couldn’t hold a ceremony, the game was Austin’s senior night and varstiy seniors Bentley, Mary Obang and December A were recognized after the game.

“I’m extremely proud of the seniors. This whole season has been a trial,” Levisen said. “Every game we don’t know what team we’re going to have and I’m really proud of them for giving it their all.”

The Packers are set to open up Section 1A Tournament play on Monday.