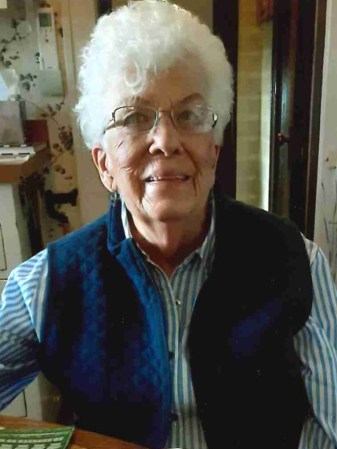 Born July 18, 1929 to Henrietta (Scott) Peterson and William E. Peterson in Laredo, TX. Her family moved back to Austin shortly after her birth. Pete was confirmed from St. Olaf Lutheran Church and graduated from Austin High School in 1947. Her love for the arts started early with tap classes and even a music program on K.A.T.E. radio while in sixth grade. Dolores played the marimba on this Saturday afternoon program. Her theme song was “The World is Waiting for the Sunrise”. In high school she worked as a cashier at the Paramount Theatre. Then after graduating she cashiered at the Hormel Cafeteria. Pete met Keith Judd one evening at the Terp Ballroom. They were both always ready to hit the dance floor when they heard their favorite Big Band music. In November of 1949 Dolores & Keith were married at St. Augustine Catholic Church. They then had five children together. While the kids kept her plenty busy she still made time to work as a teacher’s aide at St. Edward’s Elementary and lead both the Boy and Girl Scouts. Pete cherished her 40 years working at the Hallmark Shop in downtown Austin making many friends with countless fond memories. Outside of her family that was her greatest joy!

She and Keith loved traveling, especially their annual vacations with their children and friends to the Wisconsin Dells. They also treasured travels with their daughter Cathy and son-in-law Jim to Texas, Florida, and Europe. Pete enjoyed time with all her friends from the Evie’s Travel bus trips, St.Olaf Hospital Auxillary, Business Professional Women, Y’s Women, and the American Legion Auxillary which she was a memeber of for over sixty years. For several years Pete and Keith were active members of St. Edwards Catholic Church, being among the original members.

Dolores and Keith found their perfect home in 1968. It was the ideal spot for family and friends to gather. They always hosted back-to-back Christmas parties with a full house of Petersons on the Eve and maximum capacity of Judd’s on Christmas Day. Pete curated over fifty photo albums that capture all their vacations, holidays and milestones. She also wrote a book called “Cookies out of Cookies” detailing her childhood growing up on Water Street. She later organized a booklet about her grandfather George H. Peterson’s life at Hormel. He was George Hormel’s first employee, something that made her very proud. Pete really enjoyed helping organize her class of 1947’s many reunions and later monthly get togethers. Pete dabbled in oil painting and did some quilting for her grandchildren. She had a wonderful sense of humor and thoroughly enjoyed life! Pete was loved by her family and will be truly missed by all.

A Memorial Mass will be celebrated at 10:00 am on Saturday October 24, 2020 at St. Augustine Catholic Church with Fr. James Steffes officiating. Interment following at Calvary Cemetery. Due to COVID restrictions there will not be a lunch. The family plans a celebration of her life next summer.