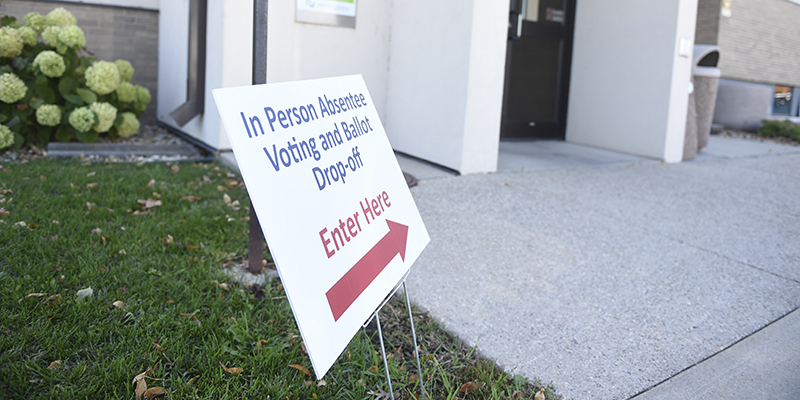 A decision by the 8th U.S. Circuit Court of Appeals has complicated matters in Minnesota just a few short days before the election.

The three judge panel ruled 2-1 late Thursday that ballots arriving after Election Day, even if they are postmarked before Nov. 3, should be separated from other ballots in case they are later invalidated by a final court order.

This overruled the state-approved consent decree that had extended the deadline in Minnesota for receiving and accepting absentee and mail ballots as long as they were postmarked by Nov. 3 and received by election officials by Nov. 10.

To ensure that your ballots are counted, both Felten and Minnesota Secretary of State Steve Simon urged people to no longer send ballots through the mail and take the risk their vote wouldn’t be counted. Instead, people are advised to bring their ballots to the Election Office in person at City Hall, 500 4th Ave. NE no later than 3 p.m. on Election Day. Mail ballots must be received by 8 p.m. on Nov. 3.

“The court’s decision is a tremendous and unnecessary disruption to Minnesota’s election, just days before Election Day,” Simon said in a statement following the decision. “This last-minute change could disenfranchise Minnesotans who were relying on settled rules for the 2020 election — rules that were in place before the August 11 primary and were accepted by all political parties. It is deeply troubling that the people who brought the lawsuit, a conservative legislator and presidential elector, would seek to sabotage the system for political gain.”

This entire process is made even more confusing by the fact that there seems to be no finality to the decision.

“What the court left unsettled was the question of whether, once and for all and finally, ballots will or won’t be counted if received after Tuesday, Nov. 3,” Simon said. “The decision, to be candid, is not a model of clarity and it leaves open a lot of unanswered questions.”

As of Thursday night, nearly 400,000 people have returned absentee ballots in the state out of 2 million requested outstanding ballots.

According to Felten, as of Thursday, there have been approximately 8,300 absentee ballots sent out in Mower County. Approximately 6,700 ballots have been sent back and accepted.

This breaks down to over half of Mower County registered voters having either requested an absentee ballot or were sent a ballot because they live in a mail precinct.

The case will now go back to U.S. District Judge Nancy Brasel, who previously upheld a state court agreement that allowed ballots postmarked on or before Election Day to be counted if they are levied by Nov. 10.

The move could very well cause confusion among voters. Nevertheless, Felten said his office will continue doing the work to ensure that votes are accounted for.

“We should still collect and sort the ones we receive after election night,” Felten said.

Earlier this month, Felten announced extended days and times for people to hand deliver their ballots to the Auditor/Treasurer’s office.

These extended days and times are:

Next Steps for Voters

Voters should no longer place their absentee ballot in the mail. Instead, voters have several options to ensure their vote is counted in the November general election:

Bringing a scare and providing care