Born March 19, 1924, in Cranston, Rhode Island, George Joseph Peters was one of seven children to Portuguese immigrant parents. He grew up on the family farm, where he was living when the United States entered World War II. Despite having a fear of heights, Peters volunteered for the Army’s Airborne School when he joined the Army in 1943. His reason: airborne soldiers earned more money than regular infantrymen, allowing him to send more home to his family. 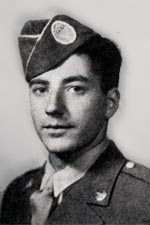 On March 24, 1945, the men of the 17th Airborne found themselves jumping into Germany as part of Operation Varsity, the airborne phase of a larger allied attack across the Rhine River. After the jump, Peters and 10 other men landed in a field near the town of Fluren on the east side of the Rhine. A German machine gun crew, as well as several German infantrymen, positioned 75 yards away spotted the men as they descended and immediately opened fire.

The men were pinned down by the enemy fire as they attempted to free themselves from their parachutes. Nearby lay several bundles containing the equipment they needed to carry out their mission, but the intense German fire made retrieving the bundles impossible.

Knowing a distraction was necessary to retrieve the equipment, Peters stood up without orders and began a one-man charge at the enemy position with only his rifle and grenades. As he ran, he fired at the machine gun nest, drawing the hostile fire away from his comrades and toward himself.

Peters ran about 35-40 yards before he was hit by a burst of bullets. Somehow, he managed to get back onto his feet and continued to move forward. He was struck by more bullets and again knocked down, but he continued to crawl forward as he bled. When he was within range, he tossed grenades at the machine gun, killing two of the operators and forcing the other Germans to flee into nearby woods.

Thanks to his attack, his comrades were able to secure their equipment and move on to their objective.

President Harry Truman posthumously awarded Peters the Medal of Honor on Feb. 8, 1946. His medal was presented to his father by Lt. Gen. Oscar Griswold.

For unknown reasons, retired Army Sgt. Maj. Leo Robillard found Peters’ Medal of Honor years later at a swap meet in Cumberland, Rhode Island. Although it is illegal to sell the Medal of Honor, Leo paid an unknown price to prevent the medal from falling into the hands of a military imposter. The medal, however, did not have a name engraved on it, preventing Leo from finding the rightful owner.

Leo later moved to Henderson, Nevada, to be near his son, Wayne Robillard. After the passing of his parents, Wayne was going through a box of their belongings when he dropped the medal’s case. The back of the case came off and revealed a piece of paper that had Peters’ name on it. Wayne then contacted Del Horsley, a Marine Corps and Vietnam War veteran, who told him to give it to the American Legion to be displayed in a place of honor. In 2013, Peter’s  medal was placed on display at American Legion Post 8 in Las Vegas.