Packers keep it positive after loss to Century 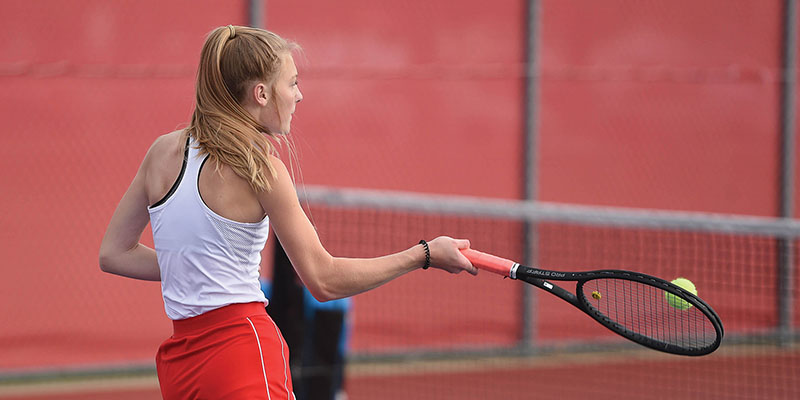 Austin’s Gracie Schmitt leans into a forehand at No. 3 singles against Rochester Century Thursday afternoon at Paulson Courts. Eric Johnson/photodesk@austindailyherald.com

When taking on the Rochester Century girls tennis team, the measure of success cannot simply be calculated by looking at wins and losses.

The Packers didn’t win any matches against the Panthers, but they certainly had some success in a 7-0 loss in Paulson Courts Thursday.

Austin’s No. 1 player Reana Schmitt was all over the court against Ancele Dolensek, but Dolensek had an answer for every move Schmitt had.

“It’s tough,” Reana said. “They’re a really good team, but every point counts and you’ve just got to fight for every point you can get. When you’re down, you can’t give up.”

“She’s probably one of the best players I’ll see. She’s really good,” Chloe said of Baber. “But we’re all just here to get better and have fun; this really isn’t about whether we win or lose. It’s really awesome to be out there and having fun. I really love just getting better and taking it one point at a time.”

Chloe is making the most out of her senior season as it will be her final time competing with Reana and her other sister Gracie, who plays No. 3 singles for Austin.

“We’re just super excited that we’ve gotten to play this year. We didn’t know what was going to happen back in August,” Chloe said. “I’m excited. It’s my last season with Reanna and Gracie.”

Austin’s Jadyn Moriarty lunges for the ball at No. 3 doubles against Rochester Century Thursday afternoon at Paulson Courts. Eric Johnson/photodesk@austindailyherald.com

Austin (2-4 overall, 2-4 Big Nine) nearly pulled off a win at No. 3 singles when Natalie Haynes and Jadyn Moriarty lost to Leia Spencer and Madeline Klotzback in three sets, dropping the tiebreaker 10-6. Kaitlyn Meiergerd also had a strong showing as she lost to Sarah Nevenheim 6-3, 6-2 at No. 4 singles.

“That was a tough team that we played but we felt good that we were competitive in many of the matches,” Austin head coach Jeff Anderson said. “The scores were not indicative of the closeness of the game scores.”

The Packers have four matches remaining on their schedule, which runs until Oct. 1 when Austin is set to host Northfield.