Minnesota Star Watch: October a feast for the eyes

October begins and ends with a full moon.

The first rises the evening of the 1st, only about three hours past the exact moment of fullness. Following it into the eastern sky is Mars, now too bright to be washed out by any lunar luster. Over to the south, brilliant Jupiter and dimmer Saturn are drawing nearer, en route to a close encounter in December. 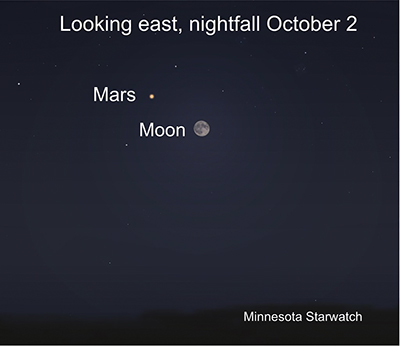 The night of the 2nd, Mars and the waning moon rise and travel the night sky together. On the 13th, Earth laps Mars in the orbital race, passing a mere 38.6 million miles from the red planet. That night Mars shines down from the constellation Pisces, where no bright stars will be close enough to rival its splendor.

Above and slightly west of Mars, the Great Square of Pegasus is now in prime viewing position. Look below it on a moonless night and see if you can find the ringlike Circlet of Pisces, representing one of two fishes in the constellation.

In the predawn sky, Venus dazzles in the east. Watch the bright star Regulus, in Leo, the lion, glide by the planet early in the month, passing closest on the 2nd and 3rd. On the 13th and 14th, waning crescent moons join Venus. All month long, look off to the west of Venus to see brilliant Sirius shining from its berth in Canis Major, the big dog. This year October and November give us a great chance to compare Venus, the brightest planet, with Sirius, the brightest star in the night sky. But it will be easier this month because the two will be closer.

October’s second full moon shines the night of the 30th-31st. The second full moon in a month is often called a blue moon, but the original definition was the third of four full moons occurring in a single season. By that definition, we’ll see our next blue moon on August 22, 2021.

October bids farewell with Halloween, an astronomically based holiday. To the ancient Celts it was known as Samhain, one of four cross-quarter days falling midway between an equinox and a solstice. It began at sundown on October 31st, when all the evil spirits that had been cooped up since May Day were released to wreak havoc on humankind. People lit lanterns in gourds to ward them off and left food offerings to appease them—traditions that survive in jack o’ lanterns and trick-or-treating.

• Find U of M astronomers and links to the world of astronomy at http://www.astro.umn.edu

Al Batt: Offer me something of interest