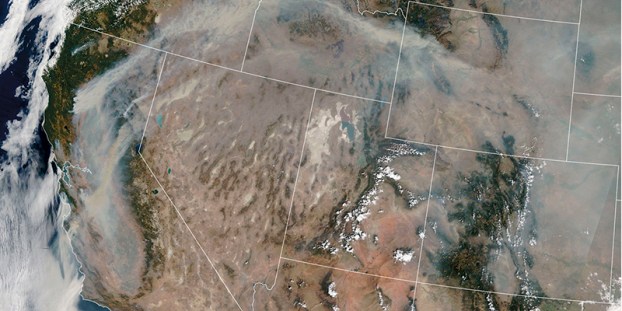 This satellite image, smoke from the California wildfires can be seen snaking across several states, into the central United States. Minnesota saw these affects, primarily in the dramatic sunsets. Photo courtesy of NASA

Effects of wildfires reach out to Minnesota

As the wildfires on the West Coast continue to wreak havoc, people as far away as Minnesota are seeing the effects in the form of muted skies and brilliant sunsets.

But there is also a health component, even if it isn’t as dramatic as those living in those areas affected directly by the fires.

Because of particulates carried by the winds, people can experience both upper and lower respiratory irritation and coughing.

“In at least the upper midwest, we’ve been fairly lucky,” said Clayton Cowl, M.D., chair of the division of prevention, occupational and aerospace medicine with the Mayo Clinic. “A lot of the heaviest downstream effects have bypassed us. Air quality has been in the 30s and that’s considered optimal.”

The danger of these fires comes in the form of the smaller particles that are about two and half microns or less and can bypass protections of the upper respiratory system. In comparison, the human hair is 70 microns, meaning these smaller particulates are 30 times smaller.

According to the Minnesota Pollution Agency, northerly winds that have brought cooler temperatures to the region earlier in the week have begun sweeping the smoke out of the area, attributing to the luck Cowl referred to.

Still, the fires could pose a threat if smoke begins drifting our way once again. What makes these fires so much more dangerous is the fact that they are now burning more than wooded areas.

“What’s different about these fires is they are actually taking out small towns,” Cowl said. “We’re seeing actual towns absolutely decimated and with that we’re seeing increased amounts of toxicity of industrial products.”

Those plastics and other materials that are breaking down are putting systematic threats like carbon monoxide and cyanide into the atmosphere, once again upping the danger for those living close to the blazes.

Some have asked if the fire and smoke exacerbate the COVID-19 pandemic and are symptoms familiar.

“Inhalation from wildfires isn’t going to cause fever, body aches or lack of smell or lack of being able to taste stuff,” Cowl said. “There are subtle differences. Not everything that causes you to cough is COVID-19.”

Mask wearing is a common trait of both; however, just at different levels. A simple cloth mask most people are using to fight COVID-19 won’t do much if one is in close proximity to the fires, but N95 masks will.

Recent NASA satellite images have shown the smoke stretching across the globe, and even though the midwest hasn’t been affected as much as those states that are the source of the fires, there really is only one answer and that’s putting the fires out.

“I hope that these fires will get rain this week so they will be able to be controlled better,” Cowl said. “Putting out the sources is key.”

No rest for the best

With basketball commitment out of the way, Oswald focuses on being a Blossom   BLOOMING PRAIRIE – If Blooming Prairie... read more