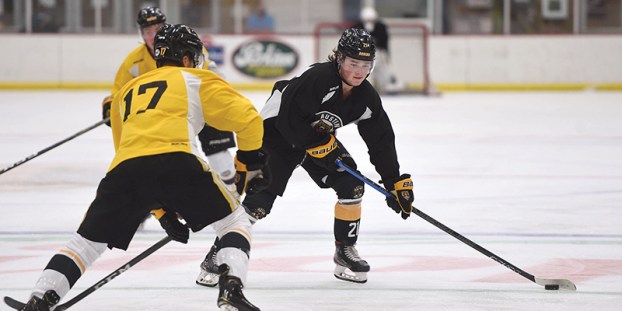 Prospective players had a final shot of making the team in two nights of Black and Gold games at Riverside Arena. The first was Friday night. Eric Johnson/photodesk@austindailyherald.com

Bruins close in on final roster

The Austin Bruins spent this week working on team building skills and they showed what they learned in front of a crowd with an intersquad scrimmage, which the Gold Team won 4-3 in Riverside Arena Friday night.

Peter Jacobs put the Gold Team had 3-2 with an early second period goal and Ben Oakland made it 4-2 when he scored with 13:54 left in the period.

The Black Team pulled within 4-3 when Peyton Hart scored with 10:42 left in the third.

From that point on, nothing came easy as Shane Soderwall entered the game at goalie for the Black and Zachary Foster came in at net for the Gold. Neither of them allowed a goal in relief.

Austin head coach Steve Howard wasn’t concerned with the final score as much as he was focused on what his players were learning as they fought for roster spots.

“It looked like they settled in a little bit,” Howard said. “For me, it’s not about who wins and loses in this type of situation, it’s about who’s playing within the system. We look at the intangibles of what every kid has. Are they finishing their checks? Are they in the right spot? Are they helping out in the D zone? All of that stuff is important for us.”

The Austin Bruins held their Black and Gold game Friday night at Riverside Arena, a chance for coaches to get a final gauge on their players. Eric Johnson/photodesk@austindailyherald.com

While they spent much of the week working on togetherness, the Bruins showed they haven’t lost their love for confrontation and competition. After four goals were scored in the first period, things tightened up on defense and it even got physical when Lyncoln Beldenberg-Howarth and Nathaniel Albers broke into a fight in the middle of a highly contested third period.

Intensity like that is good for the Bruins, but they’ll also have to learn to play in Howard’s system if they want to be a force in the NAHL Central Division this winter.

“As far as the team building aspect, getting everybody together this week is huge,” Howard said. “Some of the last few days were good and some were bad, but that’s understandable. A lot of guys have never played in this system before. It’s different and it takes a little bit of our time. It’s our job to beat it into their heads so many times that it becomes instinctual and they don’t have to think too much.”

While the full schedule is yet to be released, the NAHL has its sights set on beginning the season Oct. 6.

This season will be the Bruins’ 11th season in Austin.

The Bruins will host another intersquad scrimmage at 7:05 p.m. Saturday in Riverside Arena.

Scarlets get past Austin swim team