Born June 27, 1918, in Portland, Oregon, David Richard Kingsley was 10-years-old when his father died in a car accident. At the time, his mother was pregnant with his eighth sibling, prompting Kingsley to take on a great deal of responsibility in the household. When his mother was diagnosed with cancer in 1936, Kingsley became a father figure to his younger siblings, taking care of them and their bed-ridden mother after their older brother joined the Navy to provide income for the family. After his mother passed away in 1939, Kingsley continued to look after his siblings even after they were placed in foster homes. 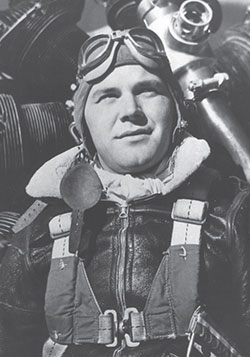 Kingsley was working as a fireman when the Japanese attacked Pearl Harbor. In April 1942, Kingsley joined the U.S. Army Air Corps as an aviation cadet. In July 1943, he was commissioned a Second Lieutenant after completing navigator/bombardier training. He was assigned to a B-17 combat crew and, after additional training, was deployed to Amendola, Italy, in March 1944 and assigned to the 341st Bombardment Squadron, 97th Heavy Bombardment Group, 15th Air Force.

Over the course of two months, Kingsley and his crew completed 20 missions aboard their B-17, nicknamed “Sand Man.” But their plane was out of action for repairs when the 15th Air Force planned its largest mission yet – an attack on oil refineries in the vicinity of Ploiesti, Romania.

The refineries of Ploiesti were not unfamiliar to Allied commanders. The refineries were responsible for one-third of the German military’s oil supply, making them desirable targets. On Aug. 1, 1943, an Allied bombing attack on the refineries, known as Operation Tidal Wave, resulted in disastrous Allied losses. Bombers that participated in Operation Tidal Wave took off from Benghazi, Libya, roughly 1,200 miles from the target and too far for fighter escorts. To make matters worse, the Germans had deciphered the American code and knew the bombers were coming. The ensuing losses against the heavily defended target prompted Allied commanders to wait until April 1944 before attacking the refineries again.

On June 23, 1944, Kingsley and his crew joined 760 B-17 Flying Fortresses and B-24 Liberators for an attack on the Ploiesti refineries. They were flying aboard B-17F-35-VE, nicknamed “O Pissonya,” for the attack.

As they approached the target, the notorious Ploiesti defenses began to hamper their progress. Ground flak damaged the plane, forcing the crew of “O Pissonya” to fall back from the formation and lose altitude after damaging one of the engines. Next came a swarm of German Messerschmitt Bf 109 (ME-109) fighters that found the damaged bomber an easy target. The crew managed to shoot down several ME-109s, but the fighters damaged another engine.

During the fighter attack, tail gunner Mike Sullivan was struck in his head, right arm and shoulder. His parachute was also damaged in the attack. Sullivan managed to crawl his way to the waist gunners for aid; when it became clear they could not tend to his wounds and fight off the Germans, they called up to Kingsley for help.

Kingsley brought Sullivan to the radio room to tend to his wounds as the bomber escaped from the Ploiesti defenses and crossed into Bulgaria. The plane continued to be harassed by ME-109s; a third engine was damaged and the ball turret gunner was wounded. As Kingsley attended to the turret gunner’s wounds, the pilot realized he could no longer keep the bomber flying and ordered the crew to bail out.

As the rest of the crew abandoned the bomber, Kingsley and Sullivan were still in the radio room. Knowing Sullivan’s parachute was damaged, Kingsley unstrapped his own, placed it on Sullivan and helped carry him to the bomb bay door.

“David took me in his arms and struggled to the bomb bay, where he told me to keep my hand on the rip cord and said to pull it when I was clear of the ship […] Then he told me to bail out. I watched the ground go by for a few seconds and then I jumped. I looked at Dave; the look he had on his face was firm and solemn. He must have known what was coming because there was no fear in his eyes at all.”

In the ensuing crash near Suhozem, Bulgaria, Kingsley and seven members of a Bulgarian family were killed. Kingsley was buried in a grave in Bulgaria; in 1949, his remains were later relocated to Arlington National Cemetery.

In 1957, Klamath Falls Municipal Airport in Oregon was renamed Kingsley Field in his honor. On Oct. 23, 2004, a monument to Kingsley and the seven Bulgarian crash victims was dedicated in Suhozem.