StarWatch: Full moon kicks off the month of September

September gets right down to business with a full moon the night of the first. It makes a solo journey across the night sky, there being no bright stars close to it. Only lonely Fomalhaut, the mouth of Piscis Austrinus, the southern fish, will glimmer below the bright lunar disk. 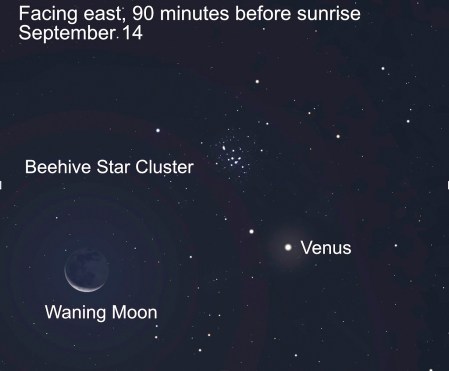 But the full moon will be about midway between bright planets. Off to the west, brilliant Jupiter and dimmer Saturn are high in the south at nightfall. Off to the east, Mars climbs over the horizon a couple of hours before midnight, its ruby orb waxing to rival Jupiter as Earth catches up to it in the orbital race.

The night of the fifth, a waning moon rises close to Mars. The moon will be reddened like a rising sun—or the planet that appears ready to ride the moon across the night sky. By the predawn hour, however, the moon and Mars will have shifted positions, with the moon now higher than the red planet.

The evening sky will be moon-free for about two weeks in the middle of September. Get out your star chart and look for the fall “water” constellations Capricornus, the sea goat; Pisces, the fishes; and Aquarius, the water bearer. Or even dim Piscis Austrinus. And watch the Great Square of Pegasus make its grand entrance in the east.

In the predawn sky, a last quarter moon shines high on the 10th. Look to the east on the 14th, when a crescent moon appears close to luminous Venus and the dim but lovely Beehive star cluster.

Fall arrives with the autumnal equinox at 8:31 a.m. on the 22. At that moment the sun crosses the equator into the southern sky and an observer in space would see Earth lighted from pole to pole. Also, from then until spring, the day length shortens as we go farther north.

By Troy Christianson Question: How long can a trailer and a trailer boat combination be on the roadway? Photo provided... read more