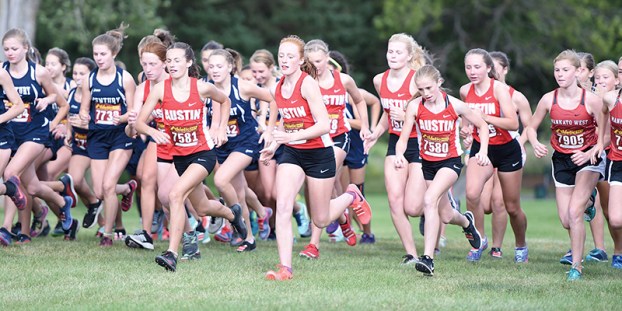 With football and volleyball being pushed back, many athletes are opting to take up cross country. Herald file photo

Rocky Hulne: The trial and errors of a reluctant runner

The Friday night lights will be dim and the volleyball courts will be empty this fall, but there are some athletes who are refusing to remain stagnant.

As I’ve been working on area previews, it sounds like a plethora of fall athletes in Southland, Blooming Prairie, Hayfield Grand Meadow and LeRoy-Ostrander are taking on the challenge of running cross country,  giving them the opportunity to be four-sport athletes if the MSHSL is able to produce a winter, spring and summer season as it plans to.

As a former basketball scrub turned mediocre jogger, I can tell all of these athletes that cross country will be a lot tougher than they may assume it is.

When I was active in basketball and even backyard football in my younger days, I never had to run for more than three minutes straight, and this was no accident. While my father went out and would run for the fun of it as he trained for Grandma’s Marathon in Duluth in my teenage years, I was very content to go out and shoot hoops or play catch for two hours. I built up a sweat, I had fun and I felt no need to hear my feet pound against the pavement for hours on end with my dad.

But as I grew older and I couldn’t find anyone to play basketball with, I stubbornly decided to take up running. I have never had dreams of competing or chasing after a marathon, but it has served as a way to keep me in generally decent health while getting out and seeing nature.

Over the last five years or so, my relationship with running has evolved into one of tolerance. It is something that pumps me up, but I always feel better after I finish a run, whether it be a half-mile or four miles.

I can tell you when I began running regularly, my relationship with that activity was one of pure distaste. My feet would burn, my legs would sting and my heart would pound, and that was after advancing two blocks.

While I could have quit, I pushed myself a little bit harder each day. It took about three months before I could actually run a mile straight without walking and it took another few months before I could finish a run without being completely exhausted, but eventually I felt a strong sense of accomplishment.

While the football and volleyball players who are trying for cross country this fall won’t have months to adjust to distance running, they will probably go through a similar trial of pushing themselves against tiring bodies.

However it goes, I hope these athletes make the best of their experience in distance running.

After all, they may just learn to tolerate it.