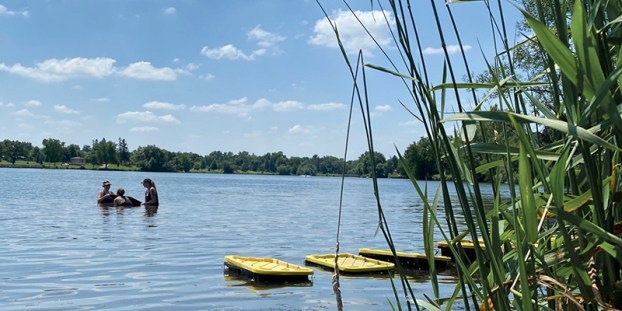 Mussels are maintained in East Side Lake where they will later be transported to the Cedar River. Photo provided

With hundreds more added Thursday, Austin’s East Side Lake now hosts about 7,100 native mussels growing in the backwaters created by the dam on Dobbins Creek.

These species of native mussels — black sandshell, mucket, threeridge and spike — are expected to be transplanted by the Minnesota Department of Natural Resources in the Cedar River State Water Trail at several sites downstream from the downtown Austin dam through a few tag-and-release efforts over the next year or so.

A new grant for the DNR also might open the possibility of mussels grown in East Side Lake remaining in Dobbins Creek to help improve its water quality and aquatic ecosystem.

Friends of the Hormel Nature Center recently approved a $5,000 grant for the DNR’s mussels team out of Lake City to survey Dobbins in August for the past and present existence of mussels. 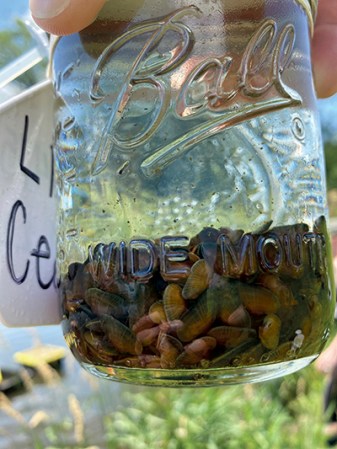 “This could give a path for the DNR to transplant native mussels in Dobbins Creek in addition to the Cedar,” said Madeline Pletta, a mussel propagation biologist with the DNR’s Ecological and Water Resources division.

DNR expects to survey about 10 sites in the Dobbins watershed, which includes north and south branches that converge in the Jay C. Hormel Nature Center before flowing under Interstate 90 into East Side Lake. Not far from the East Side Lake dam, Dobbins Creek flows into the Cedar River in Austin’s Driesner Park.

With data gathered over a day or two, the DNR survey will also provide helpful information to the nature center’s water education curriculum on the creek that hundreds of area students interact with every year, said Luke Reese, the Nature Center’s director. The grant fits with the Friends’ decades of work to protect the Nature Center’s land and water, he said.

“The Friends value the opportunity to contribute to science on the waterway that makes the Nature Center such a special place,” Reese said.

The Cedar River watershed is one of three in Minnesota chosen for this work by the DNR’s Center for Aquatic Mollusk Programs (CAMP) in Lake City along the Mississippi River.

Pletta, who leads the Cedar River mussels project launched in 2016, led the Cedar’s first tagging and transplanting of mussels in July 2019. The DNR removed about 1,500 black sandshell mussels that had been growing in East Side Lake and placed them at three sites on the Cedar River on Austin’s south side as well as downstream in Austin and Lyle townships.

DNR surveys show rivers in Minnesota’s southern one-third no longer support their historical assemblages of mussel species. Black sandshells, for example, only were found as dead shells in the Cedar River in Minnesota and its tributaries.

Earlier this month, the DNR placed about 3,300 native mussels — all juveniles — in East Side Lake to start growing for a hopeful transplantation in the Cedar in fall 2021, if state funding comes through. That was in addition to about 3,300 other mussels growing there since fall 2019 that hopefully will be tagged and placed in the Cedar in late August or September.

Cedar River Watershed District outreach coordinator Tim Ruzek, a Friends board member, requested the DNR funding for the Dobbins survey and has worked with Pletta on mussels outreach locally. CRWD has focused the past five years on the Dobbins watershed for conservation projects, practices and research, such as electrofishing surveys and water monitoring.

Pletta gave a public presentation on the DNR’s mussels work in November at the Jay C. Hormel Nature Center. She also has presented on the work to students at Austin’s I.J. Holton Intermediate School.

Mussels grow underwater at East Side Lake in plastic totes with holes on the sides to allow the movement of water and nutrients. This effort began in May 2017 at East Side Lake. When removed, the DNR tags each mussel before transplanting in the Cedar at sites below the downtown Austin dam to better enable the spread of mussels along the nearly 21 river miles from that point to the next dam just across the Minnesota-Iowa border in Otranto, Iowa.

Austin was known in the 1890s and early 1900s as “Pearl City” for its abundance of freshwater mussels, which became over-harvested by people for making buttons and jewelry as well as searching for the rare pearls found in some.

In Minnesota, it is illegal to collect live mussels and possess the shells of dead mussels that are state-listed species.

Freshwater mussels can live for several decades and, in some cases, a century or more. They provide critical ecological services, such as structural habitat for other aquatic invertebrates and food for fish, birds and mammals.

Mussels filter suspended particles in water, including E. coli bacteria, and are considered “ecosystem engineers” because freshwater mussels modify aquatic habitat to make it more suitable for themselves and other organisms. They are sensitive particularly to habitat disturbance and pollution, making them excellent biological indicators of a river’s health.

For three decades, Hanson Tire Service owner Bruce Turner has been behind the counter helping people with their tire needs... read more