A Chicago man who allegedly touched a 15-year-old girl in an inappropriate manner made his first appearance on Friday in Mower County District Court. 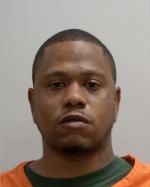 According to the court complaint, Austin police were dispatched to a call regarding a sexual assault at about 1:05 p.m. on Aug. 13 at a business in the 1400 block of 14th Street Northwest. Dispatch advised that a male subject had tried to get the victim to follow him and had touched her breast area while the two were in the entrance area of the store. The officers learned that the victim had gone to her home after the incident and that a Minnesota state trooper arrived and saw the suspect, Turks, entering the men’s bathroom.

An officer made contact with the victim, a 15-year-old female, by telephone. She reported that she was in the entryway of the store waiting for her ride when Turks asked her if she wanted to take a walk with him. She said Turks also asked her who she lived with and if she liked to “try new things.” The victim then indicated Turks put his hand on her right breast area (over her clothes) and it was not accidental. She also said Turks tried to get her cell phone number.

She described his behavior as “creepy,” saying she felt uncomfortable and she believed Turks might try to abduct her. She said her mother then arrived and gave her a ride home.

Police then spoke with Turks, who said he did not know the victim’s age and that he only said two things to her. He denied touching the victim’s breast and said he was waiting for a bus to Chicago when the incident occurred.

A review of Turks’ criminal record shows prior convictions for burglary, domestic assault and fleeing police. He is currently awaiting disposition on a charge of violating a domestic abuse no contact order.

Turks will appear in court again on Aug. 27.

Volunteers are needed for the next Ruby’s Pantry distribution on Thursday, Aug. 20, at the Mower County Fairgrounds. This will... read more