The suspect in a June drive-by shooting in Austin was sentenced for multiple felony convictions on Thursday in Mower County District Court.

Manamany Omot Abella, 21, of Austin was sentenced to 60 months in the Minnesota Correctional Facility in St. Cloud for felony second-degree violent felon in possession of a firearm. He received credit for 59 days served.

He received concurrent prison sentences for the following:

• 60 months for felony violent felon in possession of a firearm with credit for 378 days served;

• 15 months each on two counts of felony fifth-degree drug possession; and 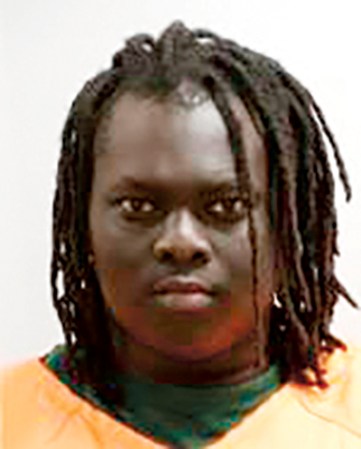 Abella was first arrested on May 2, 2019, after police executed a search warrant on his residence in the 1800 block of Third Avenue Southwest. Officers located two pistols, .22 caliber and .380 caliber, in Abella’s bedroom, along with hallucinogenic mushrooms, a box of 9mm ammunition, a small amount of cocaine, several THC cartridges and a large amount of cash.

Abella was arrested again on June 22 as a suspect in a drive-by shooting that occured in the 300 block of South Main Street. Court documents state an adult female advised that she heard some gunshots and then saw some people run into a nearby apartment. Another witness also reported hearing gunshots that occurred after a fight in the area and seeing a car drive from the scene toward the Roosevelt Bridge.

An officer arrived in the area and saw several people frantically waving at him from the front porch of a residence in the 300 block of South Main Street. The officer was unable to get coherent individual statements due to the chaotic scene, but the group of people indicated that there was a shooting and they believed the suspect was in a black four-door vehicle. They also said that Abella was possibly the person who shot a gun at the residence or provided the gun to another person to shoot. They reported four to five shots initially, and then more shots at a different location after the suspect vehicle drove off. The group also indicated that the vehicle was last seen headed north on South Main Street and was likely going to Room 134 at the Rodeway Inn.

Police located two S&W .40 caliber shell casings and two live rounds on the east side of South Main Street. They also recovered a black Chicago Bulls hat in the middle of the road. A bullet hole was seen in the driver’s side window of a van in the driveway.

Officers then drove to the Rodeway Inn and learned that several people departed from Room 134 and left in a car with Minnesota license plate 804MYB. That vehicle was located and stopped and two females fled from the vehicle. The vehicle was occupied by four males, but no firearms were located on any of the subjects or inside the vehicle.

Detectives arrived at the scene and learned that Abella and the juvenile recognized by the witness were involved in the shooting. The detectives then went to the location of a second drive-by shooting in the 800 block of Sixth Avenue Southeast, where an officer pointed out numerous 9mm shell casings in the road.

The detectives then went to the Rodeway Inn and observed several subjects enter and exit Room 134. They were granted a search warrant for Room 134, Abella and the juvenile. Abella answered the door and was taken into custody. Nothing of evidentiary value was located in Room 134.

One of the detectives reviewed a report regarding the traffic stop of a Chrysler 300 and noted that the driver said Abella had shot at his vehicle. In addition, the passenger reported that Abella pointed a handgun at the crowd at the Main Street residence, taunted them and fired shots into the air.

Abella was read a Miranda warning and interviewed at the Mower County Jail. Abella initially claimed that he just “woke up” when the police arrived at Room 134 of the Rodeway Inn, then stated that his mom got a visit from “someone” with a gun, who accused Abella of breaking some windows. Abella said he went to “Main Street” in a dark colored SUV, which was being driven by someone he did not know. He said he confronted a “fat guy named Goo Goo or something like that” and then he got punched by “Danni Jones” and then by “Goo Goo.” He then said he left the location, returned to the Rodeway Inn and “got drunk.”

Abella denied that he returned to the South Main Street residence and denied any knowledge of a shooting or of anyone having a gun. He did admit that the juvenile was with him when he got punched by “Danni Jones” and “Goo Goo.”

A review of Abella’s criminal record shows prior adjudications of delinquency for third-degree assault and first-degree burglary.

Author’s note: This is a continuation of the Herald’s candidate Q&A features and the second such feature with State Rep.... read more