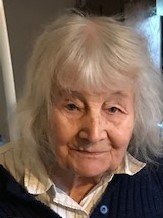 Alice Louise (Chapek) Hofner, age 98 of rural Austin, Minnesota, passed away Thursday, July 30, 2020, at her home. She was born to John and Theresa (Svejkovsky) Chapek on December 21, 1921, in Freeborn County, Minnesota. Alice attended a small, country school near her childhood farmhouse. At approximately 20 years old, she and her sister went to Chicago, Illinois, to work at the Danlees Defense Plant working on submarines during World War II. Later, Alice went to work for the Western Electric Company answering telephones. Here, she met her husband, Deane Bryant. She later married Howard Hofner on July 4, 1968, and moved on a small farm. Alice was a member of Grace Lutheran Church of Austin, and cleaned the church when she was younger. She loved gardening, planting seeds every Spring, harvesting the new seeds in the Fall, and repeated those steps every year. Alice also cherished and loved all her animals, including dogs, cats, sheep, ducks, and geese.

MINNEAPOLIS (AP) — The Minnesota Vikings have doubled down on their reliance on stability as a vital ingredient for securing... read more