Born Feb. 14, 1928, in Plymouth, North Carolina, Jacklyn “Jack” Harrell Lucas was attending military school at the Edwards Military Institute in Salemburg, North Carolina, when he learned of the Japanese attack on Pearl Harbor. Eager to enlist, Lucas promised his mother he would come home after the war and finish his education if she would lie about his age and sign him up for the Marine Corps. When she refused, he forged her signature on the consent form and paid a notary to say he was 17. Because Lucas was big for his age, standing 5’ 8” and weighing 180 pounds with a muscular frame, the recruiter bought his story. Lucas turned 14 just before heading to Parris Island for basic training. 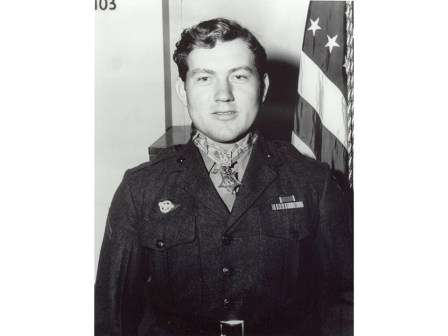 Thinking he would be heading to Hawaii with his unit, Lucas was instead ordered to remain stateside to train new recruits because of his experience in military school. Lucas found this unacceptable; in November 1943 he went AWOL and boarded a ship to Hawaii. Once on the island of Oahu, he convinced officers that he was there due to a clerical error. He was assigned to the Sixth Base Depot of the V Amphibious Corps at Pearl Harbor. On Jan. 29, 1944, he was promoted to Private First Class.

Lucas’s lie was exposed when a censor read a letter to Lucas’s girlfriend. In it, his real age (15 at the time) was revealed. Facing dismissal from the Marine Corps, Lucas convinced officers to let him stay, arguing that he would just join the Army if they kicked him out. As punishment, Lucas was relegated to being a truck driver on the base and removed from his combat unit.

On Jan. 10, 1945, the USS Deuel ferried out of Pearl Harbor with men of the 26th Marine Regiment, Fifth Marine Division. Its destination was the Japanese volcanic island of Iwo Jima. Unbeknownst to the ship’s staff, Lucas had stowed away on board. During the trip, he managed to scrounge meals from other men and slept on the deck. Fearing he might be labeled a deserter, Lucas waited until the Deuel was well out to sea before turning himself in on Feb. 8. Lt. Col. Daniel Pollock, commander of First Battalion of the 26th Marine Regiment, allowed Lucas to join Company C. Because he went AWOL, Lucas was subsequently demoted to Private.

On Feb. 19, 1945, five days after Lucas turned 17, the Fifth Marine Division joined the Third and Fourth Marine Divisions in the attack on Iwo Jima. The following morning, Lucas and his squad destroyed a Japanese pillbox near an airstip northeast of Mt. Suribachi and were taking cover in an escape trench when they were surprised by several Japanese soldiers.

The Marines and Japanese began firing at each other at point-blank range; Lucas managed to kill one when his rifle jammed. As he tried to unjam it, two Japanese grenades landed near the man next to him. Without hesitation, Lucas threw himself on top of the grenades. One failed to explode, but the other went off, flipping him onto his back and embedding over 250 pieces of shrapnel into his body.

Lucas was given up for dead, but when a Navy Corpsman went to take his dog tags, he saw that Lucas was still wiggling his hand. The Corpsman gave Lucas a shot of morphine and started tending to his wounds, shooting a Japanese soldier in the process. He then got Lucas onto a stretcher and had him carried to the beach, where Lucas remained until nightfall before being evacuated to a hospital ship.

Lucas underwent over 20 surgeries while recovering from his wounds. He was discharged from the Marine Corps in September 1945.

On Oct. 5, 1945, President Harry Truman presented Lucas with the Medal of Honor during a ceremony on the south lawn of the White House. At 17, Lucas was the youngest recipient in World War II and the youngest to receive the medal since the Civil War.

After his discharge, Lucas fulfilled his promise to his mother and finished his education. In 1961, he received a commission in the Army and joined the airborne to get over his fear of heights. While serving with the 82nd Airborne Division, he survived plummeting to the ground during a training jump after his main and reserve parachutes failed to deploy. He volunteered to go to Vietnam, but was denied due to his status as a Medal of Honor recipient. He retired from the Army as a Captain in 1965.

Lucas placed his Medal of Honor citation in the hull of the Wasp-class amphibious assault ship USS Iwo Jima during the keel laying ceremony on Dec. 12, 1997. On Aug. 3, 2006, he was one of 15 living Medal of Honor recipients to receive the Medal of Honor flag from Marine Corps Commandant Gen. Michael Hagee.

Lucas passed away on June 5, 2008, in Hattiesburg, Mississippi, at the age of 80. He is buried in Highland Cemetery in Hattiesburg.

On Sept. 16, 2016, Secretary of the Navy Ray Mabus announced that an Arleigh Burke-class destroyer would be named the USS Jack H. Lucas in Lucas’s honor. The ship is expected to be commissioned in 2023.

In an Associated Press article earlier in the week, it was reported how box stores like Walmart, Target and Lowes... read more