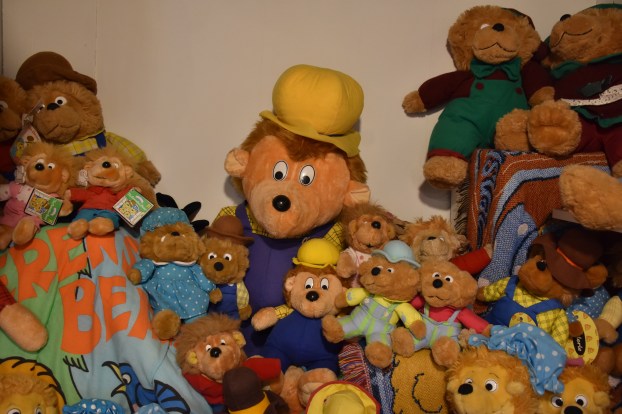 Brad Mariska' Berenstain Bears collection has been at Sweet Reads since 2016. Photo by Mike Stoll.

Since 2016, visitors to Sweet Reads in Austin have been able to see the Berenstain Bears collection of Brad Mariska.

“My favorite part of the collection is (Mariska) went back and got their books from the 1940s and 1950s,” said Sweet Reads owner Lisa Deyo. “These were really how they got their name.”

Mariska’s collection will be moving out of Sweet Reads in August. The last day for visitors to enjoy the collection is July 31.

Deyo said Mariska decided it was time to bring the collection home.

“He’s been trying to continue his work with the Berenstains with podcasts and blogs,” she said. “It’s kind of hard when you don’t have the items with you.”

Mariska approached Deyo about displaying the collection after hearing she was opening Sweet Reads.

“My kids had (Mariska) as a band teacher and I got to know him as a teacher,” Deyo recalled. “The year before this building was shut down and the previous tenants moved out, he was walking by with friends and he looked in here and said, ‘I should make that into the Berenstain Bears museum.’ His friends just laughed at him.”

Deyo agreed to Mariska’s suggestion and the collection has called Sweet Reads home for the past four years.

“He had it catalogued, he had it insured; it was time for people to see it,” Deyo said.

While Deyo said she will miss the stories surrounding the collection the most, she intends to use the space to host other rotating displays.

“You have until July 31 to hear the stories and see the world’s largest collection of Berenstain Bears,” she said. “They are favorites from grandparents to babies.”