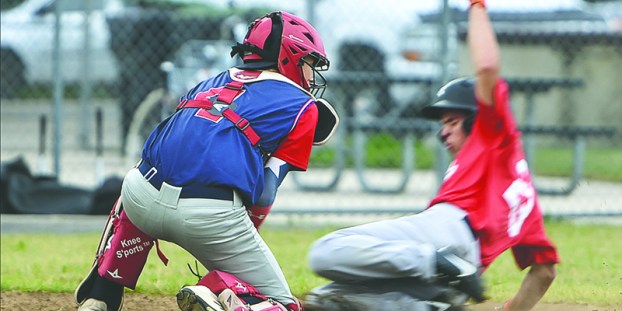 Dawson Mills plays the ball on a play at the plate against Winona Thursday night at Marcusen Park. Eric Johnson/photodesk@austindailyherald.com

Full Steene Ahead: Jaren Steene lends a bat to win over Winona

Jaren Steene is looking to make up for lost time, and he’s off to a good start.

Steene, who missed out on his senior season with the Packers due to the COVID-19 pandemic, stepped up in a big spot to vault Austin’s 18U baseball team to a 10-3 win over Winona in Marcusen Park Thursday night.

Steene gave Austin the lead for good when he belted a three-run double to deep center field with two outs in the bottom of the third inning. His shot put Austin up 5-3 after Winona had led 3-1 after two innings.

“He gave me a couple of fastballs on the side that I didn’t like and then he gave me a curve ball in the dirt. I knew he was going to come back with something, so I just turned on it,” Steene said.

Steene didn’t get a chance to play much varsity baseball during his junior season as he was buried on a deep roster for the state-bound Packers. He’s relishing the chance to play this summer and he was a big factor on Thursday, going two-for-three.

“I love it. I’m so happy to play this summer,” Steene said. “It means the world to me.”

Winona caught Austin flat-footed in the top of the first inning as it scored three unearned runs after an early miscue.

Zach Bollingberg allowed a pair of hits and a pair of walks in the opening frame, but he shut Winona down for the next five innings to pick up the mound victory.

“I knew it was a seven inning game and we were going to battle away on offense,” Bollingberg said. “We started scrapping away and I kind of got into a groove. It was my first outing of the year, and although it looked a little scary in the first inning, but I figured it out after that.” 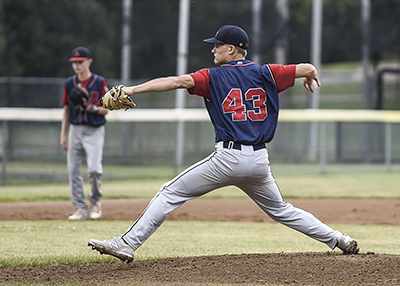 Austin, which is playing a full season in one month before the playoffs begin, opened its season with a 14-0 win in Saint Peter on Tuesday night.

The Austin 18U team is in the Southern Minny League and it includes players from Austin and Lyle-Pacelli who would have normally played on the Legion Post 91 baseball team.

“It’s been so fun,” Bollingberg said. “Everybody’s so excited. We haven’t had anything for the past three months and to be able to come out and play baseball is amazing.”

Ciola and Serratore launch homers as Hounds pound out Winona

The Austin Greyhounds put on a solid hitting display as they topped Winona 14-1 in seven innings in Winona Wednesday... read more