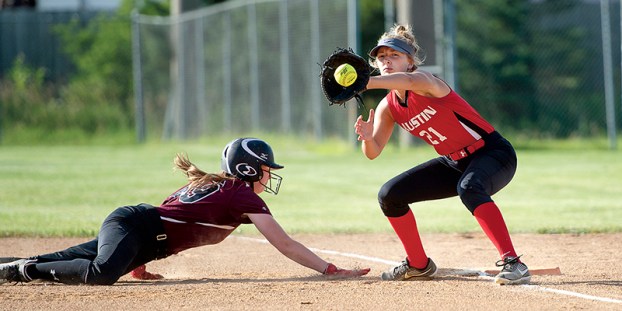 Despite being swept, Austin 18U softball is embracing its summer

With a mix of players from the surrounding area, the Austin 18U softball team is making the most of its summer.
While Austin, which includes players from Austin, Lyle-Pacelli, Southland and Hayfield, was swept by Rochester, losing by a scores of 10-2 and 10-3 in Todd Park Monday night, the team is thankful it is even getting a chance to be on the field.
Bailey Johnson, who is from Southland, said that she was even missing practice this spring.
“It feels great to be back on the field,” Johnson said. “It was such a great opportunity to play at the last minute. It’s a great group of girls who we don’t normally get to play with and it’s a lot of fun.” 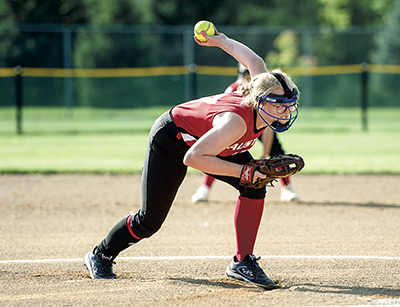 Johnson was giving it her all while hustling on the base paths Monday and her Southland teammate Hattie Wiste even dove near the dugout to try and catch a pop fly while playing catcher.
Wiste said she’s making the most out of her summer season after missing out on softball in the spring.
“It’s been really fun and we all really gel together well. Just getting to play is fun,” Wiste said. “I was upset we didn’t have a (spring) season. We didn’t get to see our friends and we didn’t get to play.”
Rochester grabbed early momentum in the first game as it scored nine runs before Austin recorded an out in the top of the first inning.
Johnson put Austin on the board in the bottom of the fourth inning when she drew a two-out walk, stole second, stole third, and then scored on a throwing error by Rochester.
Austin started off with a 2-0 lead in the top of the first of the second game as Johnson and Alana Rogne both singled to start the game. They each scored on a bunt by Hattie Wiste that included a Rochester throwing error.
That lead was short lived as Rochester roared back with five runs in the bottom of the first.
Austin is playing its entire season in just one month and the 16U and 18U teams will wrap up their schedule on July 29.