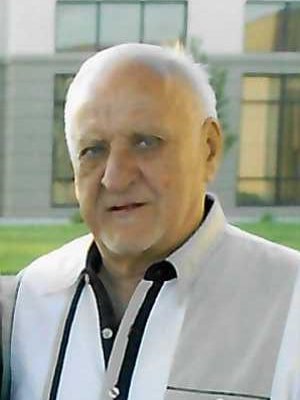 Conrad Muzik was the leader of the band. During his 31-year tenure in the Austin Public Schools, he was not just a director but a teacher and mentor of music students through the many different bands he directed and classes he taught. After a nearly two-year battle with lung and heart disease, he passed away on Tuesday afternoon, June 30, at his home with his wife of nearly 59 years, Jan Muzik, by his side.

Born and raised in Alexandria, Minn., life on the rural farm provided the most formative experiences of his life.

Entertainment options were few growing up in rural Central Minnesota in the mid-1940s. He was fond of listening to the radio, particularly the station that played big band music. One musician caught his attention: a trumpet-playing bandleader named Harry James. Many times he thought “I’d like to play like him.”

He begged his parents for a trumpet which, apparently, paid off. They bought him a King Cornett. Eventually he became so proficient his parents combined their resources — which included $75 from his mother who sold fresh eggs to the resorts in the area — to buy a trumpet for $200 (a $2,100 expense in 2020 adjusted for inflation).

His junior and senior high years were busy days with nothing left over after school and music. A new band director had come to Alexandria. Vince DiNino, “Mr. D” as he was known, was a gifted recruiter and organizer. The band played at all of Alexandria’s football and basketball games, including a memorable one against Austin at Williams Arena in the 1950 State Tournament. DiNino added a couple of extra tunes for the band. One was “At the Gremlin’s Ball” which he auditioned his players for the trumpet solo. He picked Conrad who played so well he caught the attention of Minneapolis Tribune columnist Cedric Adams. In his column following the tournament, Adams praised the trumpet playing of “the short kid from Alexandria.”

(In 1955 DiNino left to become the first full-time director of the Longhorn Band at the University of Texas, taking a 75-man band, recruiting women and other good music students from the state of Texas, and turning it into the 300-plus member “Showband of the Southwest.”)

After high school, he enrolled at the University of Minnesota. He studied there two years before transferring to St. Cloud State, a move which proved to be fortuitous. During his junior year, he met Janice Kaupp in the music department. They began to play dance jobs together along with a couple of other students. They were married in 1961.

He was preceded in death by his brother, Kenny; his mother, Lilian; and his father, John. He is survived by his wife, Jan; his sons, Vincent and Daniel; daughter-in-law, Mary; grandchildren, Quincy and Ella; Mikko, the family’s trusty canine companion, along with the many students and musicians he taught and played with.

A visitation will be held from 1-4 p.m. on Saturday, July 25, at Clasen-Jordan Mortuary in Austin. In lieu of flowers memorials to the family are preferred.