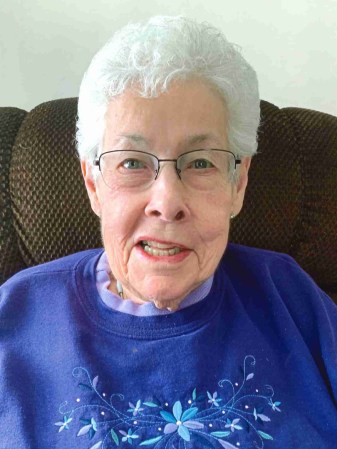 Colleen was born March 31, 1930 in her home in Nevada Township, near Adams, Minnesota to Nicholas and Mathilda (Landherr) Bissen. She was the youngest of five children, and growing up on a farm, Colleen was responsible for a number of chores including, taking care of the chickens. To make it easier to haul the feed and water to the chicken coop, Colleen crafted a harness out of an old horse harness for her dog, Buster which was then hooked up to a little red wagon to carry everything for her. After graduating from Adams High School in 1948, Colleen stayed in Adams and worked as Wagner’s Super Value for a short time. She made the big move to Austin, working there as a dental assistant for two years.

While living in Adams, Colleen met the love of her life, Bob Satern. One day there was a fire alarm near the High School and Bob asked Colleen if she wanted to go see what was going on. It was a false alarm, but their romance sure wasn’t! Bob joined the Navy and while he was stationed in Norfolk, Virginia, Colleen went to visit him and they were married on August 25, 1951, a union lasting more than 60 years. After Bob was discharged from the Navy, they moved back to southern Minnesota along with their first born of seven daughters, eventually ending up in Austin.

Besides raising her seven daughters, Colleen kept busy with her big vegetable garden as well as sewing most of the clothes for the girls, and they had lots of matching outfits. She had a variety of jobs over the years including driving a school bus, selling Tupperware, and doing upholstery work. Her most recent and favorite job was running her business, “Satern Shuttle” which included a monthly bus trip to Treasure Island Casino which she did for 40 years and just recently stopped age 88. For a number of years she also organized an annual cross country two week bus trip. Colleen was very proud of the fact that she did everything on those trips except for driving the bus and handling the luggage.

Bob and Colleen were crowned the Senior King and Queen of the Austin Fourth of July parade in 2005. On Colleen’s 70th birthday, Bob surprised her with personalized license plates for her car. A lot of people driving around Austin would recognize her car by the “7 Girls” plates.

Colleen was a longtime bowler and won the state doubles tourney in 1996 along with her daughter, Margie. She was also a member of the bowling Hall of Fame in Austin. Over the years, Colleen enjoyed camping with her family and friends, playing cards, going to casinos, BINGO, watching game shows, and especially spending time with her family. After retirement, Bob and Colleen wintered in Arizona and enjoyed traveling across the USA. Colleen was also a dog lover and enjoyed teaching them tricks. One day she received a call from the David Letterman Show for the Stupid Dog Tricks segment and even though her dog knew many tricks, the dog didn’t know how to open the fridge to get a can of beer. She was disqualified. At age 79, Colleen got a tattoo of the planet “Saturn” surrounded by seven stars to represent her seven daughters. She was always so proud to show it off!

She is preceded in death by her husband, Bob; her parents; three brothers; one sister.

A Funeral Mass will be celebrated 11 am on Saturday, August 1, 2020 at Queen of Angels Catholic Church with Father Raul Silva officiating. Friends may call from 4-7 pm on Friday at Mayer Funeral Home. Interment will be in Calvary Cemetery.

In lieu of flowers, memorials are preferred to Queen of Angels Catholic Church or the Hormel Institute for Cancer Research.