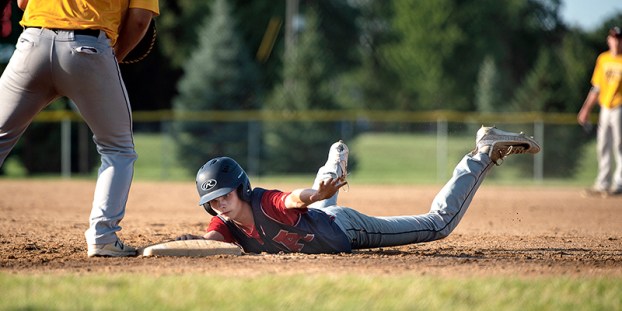 Ian Bundy dives back into first against Mankato East during 18U action Thursday night at Marcusen Park. Eric Johnson/photodesk@austindailyherald.com

There is still just over a week to go in the regular season, but the Austin U18 baseball team knows it won’t be heading into the postseason unbeaten. 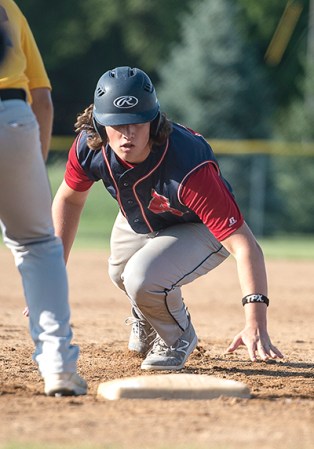 Austin U18 had its six-game winning streak snapped when it was swept by Mankato East in Marcusen Park Thursday night. Austin lost the league game 6-5 and East took the non-league game 14-4 in five innings in the nightcap.

While Austin didn’t score a win, Cole Walter was able to knock out his first career homer when he drove a pitch over the left field fence in the first game.

“I’ve never had that happen before,” Walter said. “It was a good feeling running the bases and seeing the fans standing and cheering. Hitting a home run on a high school field is something I’ve always dreamed of doing.”

Austin (6-2 overall, 5-1 Southern Minny) had a late chance in the opener as Jackson Oehlfke and Dawson Mills each singled in the bottom of the seventh inning to give Austin runners on first and second with two outs, but Nick Dunlap flew out to center field to end the contest.

East took a 6-5 lead in the top of the seventh inning when Grant Hermer drew a two-out, bases loaded walk from Austin hurler Jackson Oehlfke, who escaped further damage by responding with a strikeout. 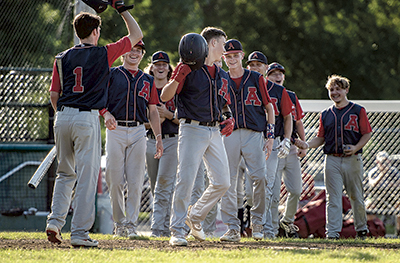 After going hitless in the fourth and fifth innings, the Austin bats woke up in the bottom of the sixth inning as Andrew Schumacher punched a one-out RBI single to right field to pull Austin within 5-4. Zach Bollingberg grounded out to score a run making it 5-5.

Walter gave Austin a 2-0 lead earlier with his solo shot in the second inning and Bollingberg doubled in another run to make it 3-0, but East put up five hits in the fourth to go up 4-3.

While Austin is down, it is certainly not out as the team has shown it can play with the best the Southern Minny has to offer.

“We have to show up every game and play hard,” Walter said. “There isn’t an easy team to play in this league.”

Both teams let their reserves play in the nightcap and East put things away in the fourth when they scored 12 times to go up 14-0.