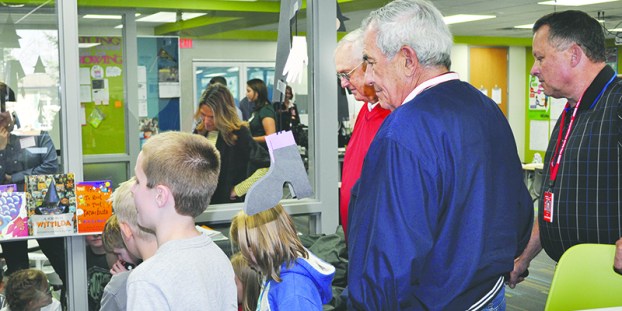 Members of the Austin Public Schools Board, including Dick Lees, center, watch as students in Pi Acadamy, at Southgate Elementary School, test out bridges they made. during a tour in 2014. Herald file photo

A desire to teach

The Austin School Board has no shortage of experienced members and come Nov. 3, voters will have to choose another to replace one of the longest termed members.

Dick Lees has been stalwart on the school board for over 20 years, having first been elected to the position in 1996.

Like his fellow retiring board member Don Fox, Lees continued his role in education, having retired from teaching prior to his storied career on the school board.

“I spent a lot of time in the elementary observing rooms and I also new the system forward and backwards,” Lees said. “I wanted to be part of things.”

Lees grew up and graduated in Austin. After going to the University of Minnesota, where he had a brief stint playing college football as a freshman, and then graduating from Michigan State, Lees moved back to take up his first teaching position in nearby Ellendale, where he was for two years before coming back to teach in the Austin system in 1961.

Starting at Ellendale and extending throughout his career, Lees taught science, which included chemistry and biology among other studies.

Throughout his career he taught at Ellis Middle School.

It was during his time there that Ellis was damaged by fire during the summer of 1986. Lees remembered finding out about the fire from a student.

“I remember I was teaching drivers training at the high school in the summer,” Lees said. “A kid came up and asked, ‘where are you going to be teaching next year?’ I hadn’t even heard of the fire.”

Lees remembered the extraordinary work the school put into finding space for the middle school classes at AHS, which included making use of the old swimming pool, which had been filled in with cement.

“They did a very good job finding us rooms — old rooms,” Lees said. “It didn’t matter. A room was a room. The kids adjusted very well. They usually did.”

Lees was also one for the athletic field as he took up stints of coaching at various levels, starting in Ellendale, where he was junior high football coach; however, in Austin he coached for a number of years on the high school team alongside Fox.

“I was with Don Fox for 20 years and we had a lot of laughs,” Lees remembered. “The kids were just plain fun to work with.”

That love for education and working with students carried with him through his time on the board. It was a desire to see the school transform into an amazing institute of education.

It was an extension of his desire to teach and follow in his mother’s footsteps.

“I just got out of the Air Force and I new I wanted to teach,” Lees said. “My mother had taught, so I was familiar with the work she had to do.”

Coming from a science background, Lees had a particular interest in Austin’s adoption of STEAM education, which has found success at IJ Holton Intermediate School.

He has also seen the continued success of the change in teaching structure that accompanied STEAM education.

“They work in groups of four generally and this has been known for years that that’s the best way for kids to learn,” Lees said. “They learn from other kids and learn to associate and contribute and it has worked out.”

Lees experience from teaching and his time on the school board has been something that has stood him out among his peers.

He’s been a source that many people, including Superintendent David Krenz, could go to should there be any needed advice.

“Dick from day one has been a confidant and one of those individuals with a huge understanding because of his history with the district,” Krenz said. “He grew up and graduated from Austin High. Just to have that perspective really helps when you’re addressing issues and looking at initiatives that can really guide your approach and foresee possible potholes.”

Krenz said it was Lees who first started bringing up the idea of STEAM learning in Austin. 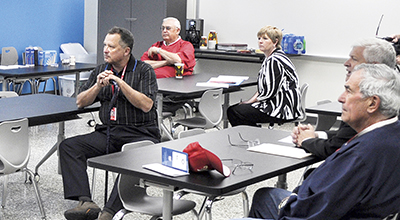 Dick Lees, center back, has served on the Austin Public Schools board for over 20 years. Herald file photo

“Dick, as we were planning IJ Holton and talking about how it would look and how we would approach it, was the one who initially talked about the STEAM idea,” he said. “Kids need to embrace the sciences, mathematics, etc. It was an opportunity to bring that here.”

However, at the center of what drove Lees’ desire to make APS as good as it could be is, and always has been, the kids themselves. This has been apparent to all who have known Lees through his career in Austin.

“To this day he talked about the the kids and the activities that kids were involved with,” Krenz said. “It wasn’t just about him in the classroom or coaching. He took it upon himself to teach science camps and go out into the summer and help with different opportunities with kids.”

“Spending his time to make sure every kid had a fair and positive experience with learning,” Krenz continued. “You can see it when he’s talking about the kids and the teachers, he lights up.”

And for Lees, that centered notion of working with kids is expanded when he talks about his time teaching and coaching and serving on the school board at Austin Public Schools.

“I’ve enjoyed my time working with the school and its people,” Lees said. “They are good people to work with and the kids — you can’t beat kids. You can have fun with them. It was just fun working with kids and kids personalities and trying to keep them together.”