Born Feb. 2, 1911, in Dover, New Hampshire, Richard Hetherington O’Kane graduated from the U.S. Naval Academy in 1934. He served on the heavy cruiser USS Chester and destroyer USS Pruitt before being instructed in submarine warfare in 1938. Upon his completion, he was assigned to the USS Argonaut. 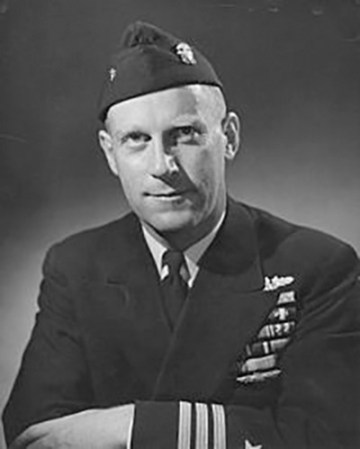 In 1942, Lt. O’Kane was made executive officer on the USS Wahoo under the command of legendary submarine commander Lt. Comm. Dudley Walker “Mush” Morton. While serving under Morton, O’Kane developed a reputation as a brilliant tactician, helping Wahoo sink 19 Japanese ships over the course of five patrols.

In July 1943, Lt. Comm. O’Kane took command of the Balao-class submarine USS Tang. The move proved to be fortunate; Japanese aircraft sank Wahoo on Oct. 11 in the La Pérouse Strait near the Japanese island of Hokkaido.

As commander of Tang, O’Kane became one of the most feared submariners in the Pacific. During the sub’s third patrol, in the Yellow Sea, Tang sank 10 Japanese ships, more than any other submarine patrol of World War II (O’Kane claimed eight ships, but Japanese records obtained after the war recorded 10 ships lost).

In October 1944, as the Americans were fighting to retake the Philippines from the Japanese, Tang was in the Formosa Strait on her fifth patrol. On Oct. 23, Comm. O’Kane spotted a heavily escorted Japanese convoy. Ignoring the overwhelming enemy strength, O’Kane ordered Tang’s crew to attack, surfacing in the midst of the convoy. O’Kane stood in the middle of Japanese bullets and shells directing fire, scoring direct hits on three tankers and a freighter. An oncoming Japanese transport threatened to strike the Tang, but O’Kane was able to move her out of the path, missing it by inches. Despite being boxed in by the burning ships and several destroyers, O’Kane managed to fire at two more targets and get the Tang safely away as ships exploded around him.

The next day, Tang again made contact with another heavily escorted Japanese convoy. This convoy was heading to the Philippines island of Leyte with supplies and reinforcements for Japanese forces on the island. Again ignoring the danger, O’Kane surfaced and attacked, sending torpedoes into two transports and a tanker. He then launched a high-speed attack against a destroyer; the ensuing explosion rocked the Tang.

It was then that disaster struck. Tang fired two more torpedoes, but one was faulty. The torpedo circled around and struck the submarine, killing 78 of the 87 members on board.

O’Kane and the eight other survivors were captured by the Japanese and spent the rest of the war in Japanese prisoner of war camps. Like many captives of the Japanese, O’Kane was subjected to harsh treatment, including beatings and starvation. He weighed only 88 pounds when he was released at the end of the war.

On March 27, 1946, President Harry Truman presented O’Kane with the Medal of Honor for his actions in the Formosa Strait. During his wartime service, O’Kane sank more ships (33) than any other submarine commander.

After the war, O’Kane testified at the Japanese war crime trials. He commanded the submarine tender USS Pelias and was later made commander of Submarine Division 32. From 1952-53, he was the commanding officer of the Submarine School at New London, Connecticut.

O’Kane retired from the Navy in 1953 with the rank of Captain. Aside from the Medal of Honor, he also earned three Navy Crosses, three Silver Stars and the Purple Heart. Due to his meritorious service, he was advanced to the rank of Rear Admiral on the Navy Directory.

In 1998, the Navy launched the Arleigh Burke-class destroyer USS O’Kane, named in his honor.

The Wide Angle: It’s OK everybody, the raspberries are blooming

I was beginning to have a moment of crisis the other day. The raspberries were late. One of the neatest... read more