A man arrested after allegedly fleeing police made his first appearance on Tuesday in Mower County District Court. 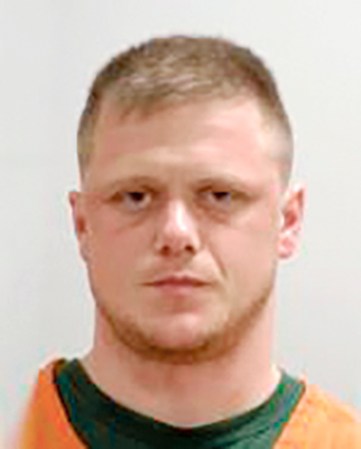 According to the court complaint, Austin police officers responded to a call at about 12:30 p.m. on June 21 in the 500 block of Second Street Southeast, near the Austin Dog Park. A woman reported that a shirtless, mud-covered white male with a “military haircut” (later identified as Krebsbach) was asking her to call a taxi for him.

Krebsbach was located in the 300 block of Fourth Avenue Southeast. An officer observed that he was not wearing shoes or a shirt, was covered with dirt and had superficial cuts on his body. The officer spoke with Krebsbach, who identified himself as “Caleb Gordon Martin.” When asked if he had been involved in an ATV accident, Krebsbach initially said he was, but then said, “No.” He also said he had not been in a fight and did not need medical attention.

Another officer checked the photo identification for “Martin” and found that it did not match Krebsbach. Krebsbach then started running towards the Cedar River. He then jumped into the river and swam to the other side, but was arrested after he was found hiding near a tree stump.

Police found his wallet, positively identified him, and learned that he had an arrest warrant issued by the Minnesota Department of Corrections. An officer then searched Krebsbach and located about 1/5th of a gram of methamphetamine in his pocket.

Krebsbach will appear in court again on July 2.

James Edward Slavan, 63, of Austin was sentenced to 69 months in the Minnesota Correctional Facility in St. Cloud for... read more