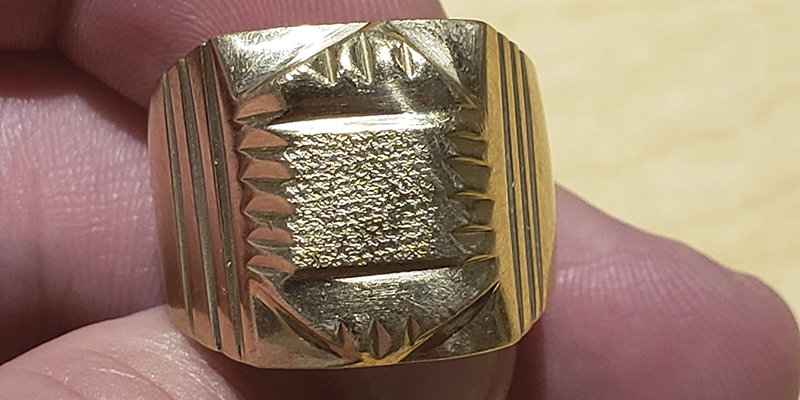 A fake ring sold to one of the victims of a fake jewelry scam. Photos provided

“We have had at least eight different people come into the store over the last two weeks after being scammed wondering if the jewelry is real,” he said.

Hartman said that the victims were approached by individuals claiming that they lost their wallet or purse and needed gas money to get back home down south. The scammers then offered to sell a gold ring, gold chain or a watch for gas money.

Several victims were approached while they were pumping gas, though one was approached at Diamond Jo’s Casino.

Hartman said that the spouse of a Stadheim employee was approached while doing yard work. He did not purchase any jewelry; however, he identified a ring brought in by another victim as the same ring he was offered.

In two cases, the suspects were described as a Middle Eastern or Hispanic woman and a Hispanic man driving a gray or silver four-wheel drive sports utility vehicle.

“Whoever’s doing this must have a dozen or two dozen pieces of fake jewelry they’re using,” Hartman said.

Victims have paid $50 or more, including one individual who paid $400 for a fake Rolex watch and ring.

Hartman said the jewelry tends to be gold plated or fake gold and stamped “18kt.”

“The stamping on them looks fishy and doesn’t look professionally done,” he said. “On a ring, usually the stamping in on the inside bottom, but these are stamped on top. The ‘8’ does not look right; it looks like a ‘0’ with a line through it.”

Hartman also noted that fake gold tends to be magnetic while real gold is not; however, some of these fakes are made of materials that are not magnetic.

Hartman said the Albert Lea location of Stadheim Jewelers has also seen people taken in by this scam.

Hartman said he contacted law enforcement, but was told they could only take reports from the actual scam victims. Neither Mower County Sheriff Steve Sandvik nor Austin Police Chief David McKichan have received any reports from the victims.

“One of my concerns is that sometimes people feel embarrassed that they were scammed,” Sandvik said. “We do go to great lengths to protect people’s identities. The embarrassment over having it happen to them often prevents people from making a formal report and giving us the tools we need. Sometimes, we are able to track down the perpetrators and make arrests and get the justice served for the victim. It’s important that we know these things are going on so we can protect the community members.”

“We just encourage people to please report it,” he added. “We have to let other people know that these things are going on so they don’t become victims. These scammers will move on to different areas if they’re not having any success where they are. Information is one of our best tools.”

Both Sandvik and Hartman urge people to not purchase jewelry under suspicious circumstances and to not confront the individuals selling it.