The proposed River Bend Townhomes project took another step forward when the Austin City Council approved a motion to vote on a resolution of support for the project during its work session Monday evening,

The Southwest Minnesota Housing Partnership (SWMHP) has proposed that the 30-unit townhome project be built on a 4.66-acre parcel at 300 15th Ave. NE, east of Kuehn Motor Company and adjacent to Interstate 90. 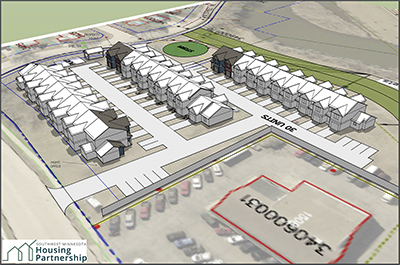 Mock up of the proposed townhomes. Photo provided

“A lot of these housing initiatives are about partnerships and we’re happy the SWMHP is interested in doing a project in Austin,” said City Administrator Craig Clark. “This is the same program that the Fox Pointe project utilized.”

The project consists of three separate buildings with the following units:

Each unit will include an attached garage.

As part of the process, the project must have a resolution of support from the council to extend tax increment financing for an income-limited housing project. Clark said the SWMHP must then apply to the Minnesota Housing Finance Agency for tax credits by July 16. Minnesota Housing will announce tax credit awards in December; should the SWMHP be approved, closing and construction will begin in Fall 2021.

The total development cost is currently estimated at $9,787,862. Clark said that occupancy rates have not been discussed, though he suspects they will be similar to Fox Pointe.

“(River Bend Townhomes) will help fulfill the demand we have for housing in the community,” Clark said. “We’re excited to see the potential for another housing project move forward.”

On March 6, the first positive case of COVID-19 was confirmed in Minnesota. It marked the first in a very... read more