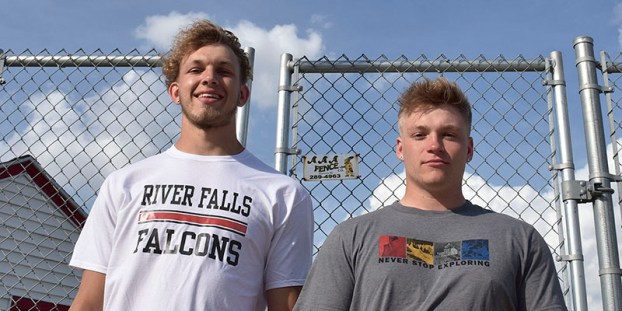 From left LeRoy-Ostrander’s Riley Olson and Carter Johnson have both committed to play football at the University of Wisconsin-River Falls. Rocky Hulne/sports@austindailyherald.com

Birds of a Feather: A pair of Cards will be Falcons next fall

LEROY — What a difference four years can make in the world of high school football.

When Riley Olson and Carter Johnson were freshmen, LeRoy-Ostrander did not have a varsity football team. Now Olson and Johnson have made the commitment to play college football after they helped lead the Cardinals to their best season in a decade this past fall. 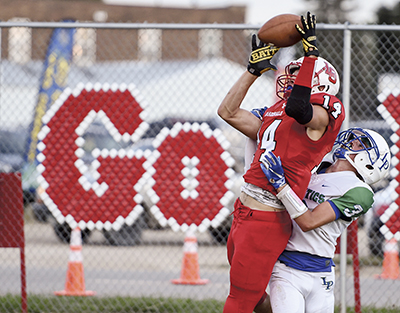 LeRoy-Ostrander’s Riley Olson pulls down a two-point conversion in the first quarter against Lyle-Pacelli in LeRoy. Eric Johnson/photodesk@austindailyherald.com

The Cardinals went 9-1 overall, a year after they went 2-7 overall, and Johnson and Olson are hoping to rekindle that magic when they head out to play together on the Division III University of Wisconsin-River Falls football team this fall.

“There’s good and bad memories,” Olson said. “When I started off in high school, we were always the bad team throughout the conference. As I got older, we started to work our way up and build our way up to being the dominant team. We had a pretty good run this year, but it sucked that we had some bad injuries at the end of the year.”

Johnson has battled through knee injuries in each of the past two seasons, but he found his stride this past fall, running for 1,111 yards and 24 TDs. He plans on competing at running back for the Falcons, and he’s glad to stay on the same team as Olson. 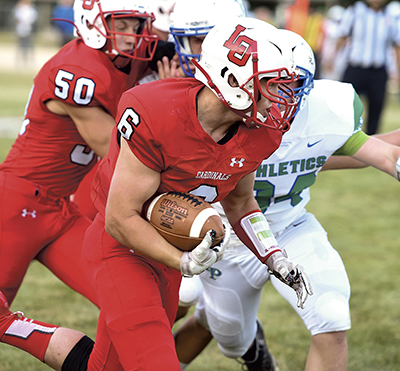 LeRoy-Ostrander’s Carter Johnson turns the corner on a run in the first quarter against Lyle-Pacelli in LeRoy. Eric Johnson/photodesk@austindailyherald.com

“It’s awesome. I’ve played with him all my life. We’re just going to keep it going moving forward. I’ve always wanted to play college football,” Johnson said. “Football has always been fun. It’s something to keep us busy and everybody was so dedicated to it. This last season changed the community a lot.”

Olson was a dual threat for the Cardinals as he had 724 receiving yards and seven TDs and 60 tackles and 10 sacks on defense. He’s projected to be an outside threat wide receiver for the Falcons.

Olson is excited about the opportunity to continue playing in college, especially for a team like UWRF, which recently upgraded all of its athletic facilities.

“I thought the facilities were awesome there and I thought the coaches were really cool. There are playing time opportunities there and that was a really big factor,” Olson said. “I’m a competitive guy, so it’s kind of my lifestyle. It’s really important for me to keep playing.”

L-O head football coach Trevor Carrier said it will be tough to take the field without Olson and Johnson, but he’s happy that they will continue to play in college.

“If my own son can emulate what these guys do on and off the field, I will be one happy dad,” Carrier said. “Bittersweet is truly the word. It’s hard to see them leave our program, but great to see them sign on and play at the next level. They might be Falcons now, but they will always be Cardinals.”

UWRF already has a few other local ties as Austin senior Nick Dunlap has committed to play linebacker/safety for the Falcons and Jake Halsey is entering his junior year as a defensive end at UWRF. Blooming Prairie grad Tim Wolf will be a sophomore wide receiver and Hayfield grad Sutton Schultz will be a senior defensive back this fall.

The Falcons finished with a record of 2-8 overall last season.

Officials recommend registration to avoid long lines   Due to the recent increase in COVID-19 cases in Mower County, the... read more