Naida Marie Samuel, 96, formerly of Austin, Minnesota, passed away suddenly and peacefully on Thursday, May 7, 2020, at Mayo Clinic Health System-Mankato. 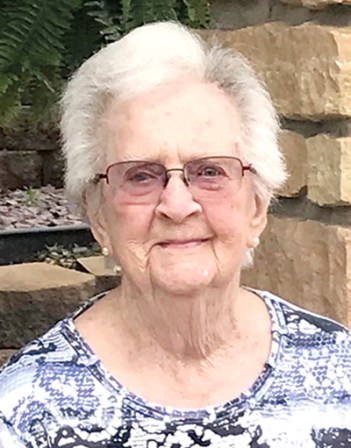 Naida was born on Oct. 10, 1923, to Walter and Sadie Bye on a farm near LeRoy, Minnesota. She and her twin brother, Knute, were the youngest of four children.  She married her high school sweetheart, Harold (Sam) Samuel, when he returned home from the Navy after World War II. They moved to Austin and Sam worked at the Hormel Plant as a mechanic. After losing premature twins, they had three children: Linda, Jim and Debbie.

Naida loved the annual family trips to Clearwater Lake in the summers when the kids were little. She and Sam continued to spend part of the summer there for years after the kids were grown. They were avid duplicate bridge players, traveling to tournaments throughout the state. Naida loved all card games and her bridge playing skills made her a fierce competitor at any card game. She took up ceramics in her 50s and found an artistic talent she never knew she had. She loved to paint and loved giving pieces to family and friends.

Naida’s life changed suddenly when her husband, Sam, died at the age of 55. She was devastated. A couple of years later, she met Don Nelson. They danced, played golf and traveled together for 20 wonderful years.

In 2016, her son, Jim, passed away. Naida then moved to Monarch Meadows in North Mankato, Minnesota, to be near her daughter, Debbie. She loved it at Monarch Meadows. She enjoyed the card games, Bingo, hymn singing and other activities the facility provided. She made many friends there.

She loved connecting with her grandkids and great-grandchildren on Facebook and Instagram. She regularly FaceTimed with her daughters and others. She stayed active until May 7, when she passed away.

A gathering of family and friends to honor Naida’s life will be held at a later date. Memorial gifts may be made to the Monarch Meadows activity fund so that others can continue to enjoy the games, trips, guest musicians and other activities that Naida so enjoyed.