An Austin man who allegedly robbed three individuals at gunpoint Friday night made his first appearance on Tuesday in Mower County District Court.

Antoine Davis, 21, has been charged with felony robbery while possessing a dangerous weapon.

According to the court complaint, an officer was dispatched on a suspicious activity call at about 11:10 p.m. on Friday in the 900 block of Sixth Avenue Southeast. 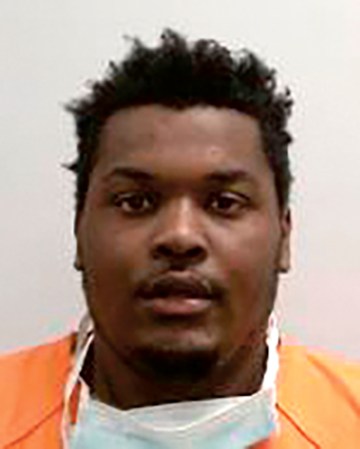 The subjects in the vehicle stated they were at Ankeny’s No. 1 about to get gas and the suspect rode up to them on a bike, lifted up his shirt, brandished a firearm, and advised them to go to the north of the gas station to the alley between the ABC driver’s training building and the woods.

The subjects stated that they followed the suspect to the area where he wanted them and stated to them, “Can I ask ya’ll a question?” The second male said that was when the suspect pulled out what appeared to be a Beretta-type pistol that was black or possibly grey in color and pointed the firearm at the subjects in the car, demanding their money by stating. The officer asked if the gun appeared to be real or fake and the second male said the gun was real.

The second male reported that all three subjects gave the suspect $200 in cash each and then the suspect left on his black mountain bike to the north through the alleyway. None of the subjects in the vehicle stated they knew who the male was.

Initially, the subjects told police they were in town visiting a friend who lives approximately 10 minutes away from the gas station.The officer asked the subjects if they were parked on Sixth Avenue Southeast before making contact with him and the subjects said they were because they were attempting to spot the suspect in that neighborhood.

The subjects in the vehicle were advised that officers would be investigating and would call them if officers located the suspect. The officer then released the subjects in the vehicle and told them to leave, but repositioned his squad car to get behind the reporting party’s vehicle because they had not left yet. He was then approached by the second and third male and was told they found out the suspect was named “Twon” and searched through a friend’s Facebook account and found an Antoine Davis who lived in Austin. They showed the officer Davis’s Facebook page and verified that he was the suspect that robbed them at gunpoint.

The officer asked them to be upfront about how they identified Davis and the second male admitted he had been talking to Davis on Snapchat because he found out Davis was selling an iPhone XR for $600. He said he did not know Davis personally. He admitted the whole $600 was his and that they initially lied about all three of them having $200 per person because they didn’t want to “snitch on somebody.”

The subjects did not know their exact bearing in Austin and did not know exactly where they were. The officer asked them to follow him to Ankeny’s  No. 1. Upon arrival, the subjects stated it was the correct gas station. The second male said they were at the gas pump facing north when Davis rode up on his bicycle from the east. After the incident, the second male said he attempted to call Davis on his Snapchat, but Davis had blocked him. He showed the officer a message that stated he was waiting on Davis to arrive at 10:42 p.m. and that was the last contact before the incident occurred.

Another officer remembered from a previous criminal report that Davis was living in the basement of a residence in the 100 block of 13th Street Northeast. Police then arrived at the residence and heard multiple voices coming from inside, though they could not see anyone. Police knocked on the front door and observed two black males, including Davis, inside the residence through the front window. The officer observed Davis look directly at the front door, then reach towards his waistband and turn around and walk briskly to the northeast part of the building. The officer drew his pistol and advised that he observed Davis in the residence.

The other male opened the front door and was told to get Davis out of the house. Police then ordered Davis to leave the bedroom and exit the house and he eventually complied.

The house was cleared by officers to ensure no one else was within the residence. Police obtained a search warrant and located a black BB/pellet gun matching the victim’s description on a closet shelf in the northwest bedroom. Davis’s driver’s license and $1,300 cash were found under the pillow on the bed.

At the Mower County Jail. Davis was read his Miranda Warning and consented to questioning. He gave multiple different stories which changed when a detective would ask questions regarding what he was saying. The detective watched the surveillance video from Ankeny’s Gas Station and noticed a vehicle arriving and parking near the pump. The footage showed Davis arriving and standing at the passenger’s door. The vehicle then pulled out northbound and Davis followed.

Davis will appear in court again on June 4.

COVID-19 cases jump over the weekend