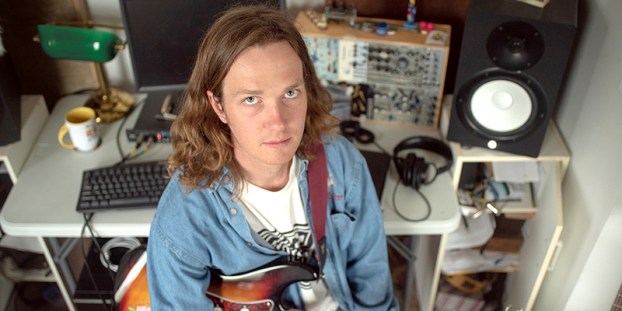 Will Bjorndal, the creative force behind Prairie Clamor, has released “Spilling Light,” a musical expansion from his first album “Next 7 Exits.” Photo provided

Light of a new adventure

Musician and Austin native Will Bjorndal has no issues admitting to liking pop music; you just have to be pretty specific  when defining it.

“When I say ‘pop’ I don’t mean Top 40 ‘pop,’” Bjorndal said over Zoom. “I mean the broarder pop cannon.  I like to go across any genre, the songs that are really good and really catchy.”

That was part of his goal in creating the follow up to “Next 7 Exits,” his self-produced album under the name Prairie Clamor that spins around growing up and living in Austin.

“Spilling Light” is a 17-song journey that takes a whole bunch of everything and brings it together in a well-thoughout and mature offering with plenty of Bjorndal quirk. The maturity is a sign of the growth reflected not only in the end result, but the process that led through to another self-produced album.

“The first album I learned a lot in recording,” Bjorndal said. “How to record songs well — studio practices, engineering. Mostly what I learned is I finally figured out how to write real songs. I think I came out with a product I was really happy with. I  played a lot more instruments, played a lot more guitar.”

The show that is Prairie Clamor comes to life often time in house settings. Photo provided

Bjorndal describes “Spilling Light” as a smoother process that included a smoother work flow and orderly approach to what he was doing.

Listen hard enough and songs like “62 Blue,” sound like they could have been ripped from the nightclubs of the early 90s alternative scene.

While the song urges people to take a break from life, it swings from it’s pressing beginnings into a frantic guitar solo to a laid back ending that finally kicks back to the tones of the first part of the song.

“There’s more genre hopping,” Bjorndal explains. “There are a multitude of genres that I incorporate. It’s not like I’m doing different genres for the shock factor, I just love so many genres.”

What “Spilling Light,” brings with it is a small but feisty live experience that trends toward the smaller venues, which is a carry over from “Next 7 Exits.”

“We had a lot of fun doing that,” he said. “It was pretty much all underground stuff, playing in clubs and in people’s houses. We worked really hard putting together our live show … with a laser show.”

These shows and music provided some good word-of-mouth publicity that pushed Prairie Clamor into the public light of the Twin Cities music scene.

That push didn’t allow a lot of rest following the release of “Exits.”

“We got a lot of good feedback and so I was excited to take it to the next level,” Bjorndal said. “I started working on new songs after (Exits) was finished. This new album continues the dialog from the last album. It’s still a lot of Austin influence.”

With this new album, Bjorndal said he had more specific goals. While he wanted to maintain some of those things that featured heavily in “Exits,” the route to “Spilling” was a more ordered process.

Will Bjorndal is the creative source of his musical act Prairie Clamor and has released his follow-up album to “Next 7 Exits,” “Spilling Light.” Photo provided

“I had some pretty specific goals,” Bjorndal said. “I wanted to write better songs, well-crafted true songs. ‘Next 7 Exits’ was experimental and I really wanted to work on regular songs.”

“There were two goals in one: I wanted the music to be more accessible, but become weirder at the same time,” he added.

Goals are defining the future for Bjorndal, who currently plays with his brother Peter, who creates the art for Prairie Clamor as well as play in what is currently a two-man act.

But with Peter heading off for more schooling, Bjorndal is looking forward to a more complete band. This move is a hopeful step in getting the name Prairie Clamor out into the public more.

“I’m ambitious, what can I say?” Bjorndal said. “Given the circumstances, I don’t know what it’s like moving forward. I didn’t play an album release show. There are plans moving forward. For the last year and half, the band has been me and Peter. I am looking at a full live band so we can play the bigger shows. I’m just trying to get more into the scene, but try and retain my Austin connection.”

That Austin connection is what lies at the heart of what Bjorndal is trying to do.

“I do just want to give credit to a lot of my formative Austin roots for getting me where I am now,” he said. “Folks like Holly Dalager, Apold Music, the music program at Austin Public Schools. They gave me the freedom and encouragement to get to where I am now.”

“Spilling Light” is available on all major music platforms including Band Camp, Spotify and Apple Music.

A discussion on the 2021 budget began Monday evening with Mayor Tom Stiehm telling the Austin City Council that he... read more