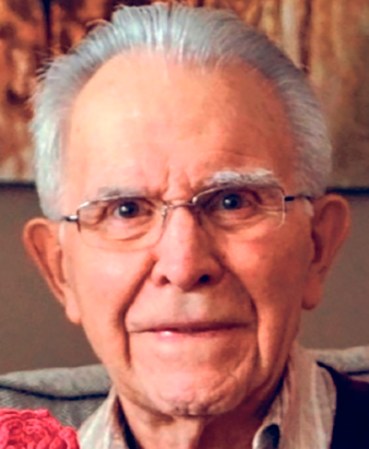 LaVerne was born Aug. 19, 1927 in Nevada Township, Mower County, Minnesota to John B. and Elizabeth (Wagner) Felten. He was raised as part of a hardworking farm family near Rose Creek along with his four brothers and two sisters. He graduated from Rose Creek High School and enlisted in the US Navy during World War II. He was Honorably Discharged at the end of the war. After the service he returned home where he worked a variety of jobs and eventually began work with the Hormel Company where he worked for 35 years. During this time, he met Jane M. Landherr and they were married on Nov. 20, 1950. They were very fond of attending local dances and they especially enjoyed dancing at the Terp Ballroon to the Big Bands that played there. They even won a local dance contest.

LaVerne and Jane were life-long residents of Austin and raised their five children there. When he wasn’t working hard, LaVerne enjoyed fishing at their cabin near Waterville, or golfing with his friends and family at Ramsey golf course where he golfed into his 80’s. He was also a long-time member of the YMCA.

LaVerne was known for his quick wit and wry sense of humor. He worked at Mayer Funeral Home for many years after his retirement from Hormel, was an usher at St. Augustine Catholic Church and also a 10-year volunteer at St. Mark’s Lutheran Home – where he stated that those were the only people he could “push around” anymore.

He is preceded in death by his wife of 66 years, Jane Felten; son, Dale Felten; son-in-law, Michael Brown; grandsons, David Brown and Joshua Williams; sister, Rosella; brothers, Harold, Edward and Arnold; along with many loving in-laws; relatives and friends.

Due to Covid 19 concerns, the public memorial service originally scheduled for LaVerne has been cancelled. Private family graveside services will be held on June 19.

As per LaVerne’s request, no flowers or memorials please.

Letter: An Open Letter to Minnesota and Wisconsin

I was the Constitution Party candidate for Wisconsin State Attorney General in 2018 and have since relocated to Minnesota. I... read more