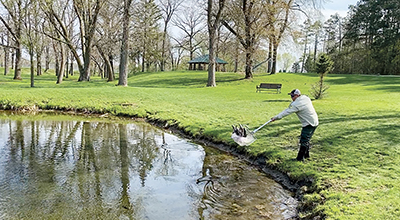 With one more round of fish, Austin’s Todd Park now has received 900 rainbow trout since mid-April for local anglers to seek in the cold waters of Wolf Creek.

On Wednesday a Minnesota Department of Natural Resources crew stocked Wolf Creek with 300 rainbow trout in several areas within Todd Park, the largest park in Austin.

Although initially expected this year to get up to 600 rainbow trout overall, Wolf was stocked with a total of 900 rainbows transported from the Lanesboro State Fish Hatchery and stocked in Austin by the DNR’s fisheries division out of Waterville. 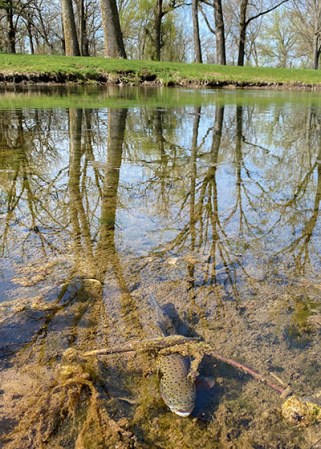 A rainbow trout swims in Todd Park’s spring-fed pond Wednesday after being placed there by MN DNR staff. Photo provided

“Anglers can anticipate a similar opportunity at Wolf Creek next year,” said Craig Soupir, the DNR’s Waterville area fisheries supervisor. “Rainbow trout destined for Wolf Creek already are in the production schedule at Lanesboro, with plans in place for stocking Wolf during spring 2021.”

Minnesota’s catch-and-take trout opener April 18 launched the new angling opportunity at Todd Park, which previously was stocked with young trout by the DNR more than 30 years ago but was stopped in the late 1980s due to predator fish, such as bass and northern pike, thwarting those efforts.

Rainbow trout stocked this spring are a “catchable” size, making them great for the DNR’s goal of a “put-and-take” fishery in Wolf Creek and keeping the trout too large for predator fish to eat. DNR wants anglers to catch and take or harvest trout caught in Wolf Creek, a Cedar River tributary that flows through the nearly 150-acre Todd Park in northeast Austin.

Trout stocking in Wolf – the only waterway in Mower County stocked by the DNR for trout – is the result of a proposal made to the DNR by Cedar River Watershed District technician James Fett, who collected water-temperature data in 2017 and 2018 at an unshaded part of the creek in Todd Park. Fett also believed the creek could host trout given the springs in its watershed, large amount of woods and increasing acres of conservation land.

Given the COVID-19 pandemic, Minnesotans are advised to recreate close to home and follow the social-distancing practice of staying at least 6 feet from others. Todd Park offers nearly 9,000 feet of public shoreline on Wolf Creek for trout anglers, helping with social distancing.

Martinez wins Democrat endorsement in race against Bennett in District 27A

Thomas Martinez of Hayward won the District 27A DFL endorsement this week and will face off against incumbent Rep. Peggy... read more