At-Large Councilman Jeff Austin has filed to run for Austin mayor, telling the Herald he believes it is the next step for him. 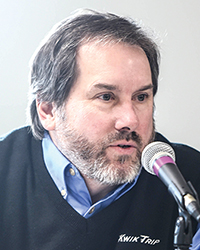 “It’s something I’ve been thinking about,” he said. “I admire the job (Mayor Tom Stiehm) has done and is doing and I didn’t want to run against him. Since he isn’t going to run, I figured now is as good a time as any.”

Austin grew up in Austin and is in the middle of his first term as councilman-at-large. He previously served three terms as councilman from the First Ward. During his time on the council, he has been a member of the Park and Recreation Board, the Austin-Mower County Joint Home Ownership Board, and is the current Vice President of the Austin Port Authority.

He is a certified assistant store leader with Kwik Trip, a position he said helped influence his decision to run.

“I started in this new position with Kwik Trip and it changed my schedule,” he said. “I’m in a position where I will have more time to dedicate to being mayor.”