Heather Wagner and Steve Brick sit in the showroom of Brick Furniture Monday afternoon. The stay-at-home order was allowed to expire Sunday night, paving the way for more businesses to begin reopening. Photos by Eric Johnson/photodesk@austindailyherald.com

A step toward normal: Businesses begin reopening after end to stay-at-home order

It’s not exactly like it was in early March, but Main Street in Austin is starting to resemble its old self again.

Jeff Brinkman, a partner at Superior Cannabis, couldn’t help but smile as he opened the doors to his shop on Monday. It was the first time he was able to see customers face-to-face in two months as retail stores have finally been given the nod to open on a limited basis after Gov. Tim Walz announced he was letting the stay-at-home order lapse Sunday night.

“It was great. As things open up, we’re hoping that we can eventually host some sort of social gathering, but we don’t know when that would be,” Brinkman said. “The best place for communication is in the shop. You can answer questions for things that are right there. It’s nice to see familiar faces.” 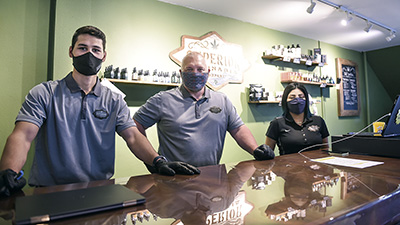 For now, Superior Cannabis is limiting the store to just four customers at a time and its employees are wearing masks. The store is also cleaned multiple times daily. During the COVID-19 shutdown, the store was able to stay in business by doing curb side pick-ups and home delivery, but that limited the chance for customers to ask questions.

Brick Furniture in Austin was able to open on April 27 as an essential business, and sales associate Heather Wagner said it has been good to see other businesses opening their doors as well.

“It was definitely strange not working. It’s a strange, uneasy feeling,” Wagner said. “It’s nice to be back open. I think we have to be able to live our lives too. It’s nice being back to work and it’s nice seeing people out and about. I’m excited to see more cars on Main Street.”

Brick Furniture has made the effort to keep the store clean and there are signs reminding people to keep social distancing.

“People are still able to come into the store. Some have masks and some don’t,” Wagner said. “We’ve just been keeping mindful of social distancing and cleaning practices have changed. We’re wiping down door handles.”

As some stores begin to open, others are anticipating when their turn will come. Annette Beasley, who is the owner of Vintage Vixen, is hoping she gets the go-ahead to open her business on June 1.

Since she works with hair, makeup, microblading, permanent eyeliner, body art and permanent body art, Beasley has been preparing to make some adjustments on how she does her job.

“There are definitely going to be precautions,” Beasley said. “It will be a little hard to do the social distancing in this line of work, but I’m sure we’ll be wearing masks and there will be a lot of hand sanitizer.”

Beasley, as well as others who are waiting to open, is counting down the days until she can open her doors again.

“It would be lovely to be able to have an income again,” she said. “That would be very nice. It is really imperative to allow the small business to open. A lot of them won’t be able to open the longer they keep pushing this.”

Misty Chastain, who owns and operates Corpus Opus, a tattoo shop in Austin, closed her doors one week before the Governor’s order forced her to due to safety concerns. Now she’s aiming to be back in service by mid-June as she works to obtain PPE equipment to run her shop safely.

“I would like to be open by June 1, but realistically I may not be able to open until mid to late June,” Chastain said. “It’ll definitely be busy. I can’t tell you how many clients I’ve had to reach out to over the last two months or so, begging to get tattooed and unfortunately, I couldn’t help them.”

Chastain said that a lot of her clients use tattoos as a form of therapy – something that a lot of people across the country have sought for during the COVID-19 pandemic. She also noted that March is typically one of the busiest months for tattoo artists.

“The devastating part is that this took place during every tattoo artist’s busiest part of the year,” Chastain said. “March is the month that we count on to get us through the small period. Us missing that month is highly detrimental to our success.”

While being out of business for nearly three months is tough on all small business owners, not everything Chastain has gone through during the shutdown has been a negative experience. The landlord of her building gave her a hint of relief when he allowed her to have one free month of rent.

“I can’t imagine how this affected him. All of us who had to shut our doors were questioning whether or not we could pay rent,” Chastain said. “I did the very best I could and he was willing to work with me. We’re all kind of in this together.”

GRAND MEADOW — Wyatt Richardson is at his best when he faces his biggest challenges. The 2015 Grand Meadow graduate... read more